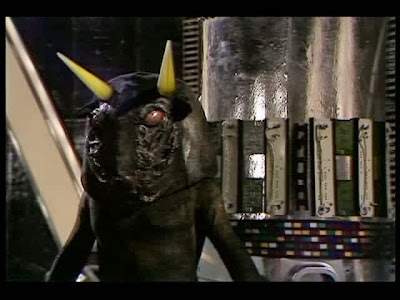 The cancellation of the ill-fated (but probably naff) Shada resulted in The Horns of Nimon effectively concluding the Graham Williams era of Doctor Who. This story is a perfect ending for that period, as it embodies many of the faults, yet also some of the strengths of the Graham Williams producership.

Like so many other Graham William stories, it all looks just a little bit cheap. There is the nagging sense that the BBC just can't be bothered to put that much effort into Doctor Who any more. One feels the same from the cast. Tom Baker can't be bothered to get into the story and just wanders about the set delivering comic lines, leaving Lalla Ward to do the Doctor's job. The guest cast are all pretty dull, apart from the co-pilot who is ridiculously hammed, and Graham Cowden who does not seem to be taking his role as Soldeed very seriously.

Yet like so many other Graham Williams stories, The Horns of Nimon does not fail to entertain. The script is witty enough to be funny and there is a tremendous spirit of fun, despite the sloppiness. Graham Cowden certainly should have played Soldeed much straighter, but he is still hilariously fun to watch. As much as he is hammed up, he is still quite an interesting character. I like the way he is convinced he has manipulated the Nimon when he has in fact been completely fooled. He speaks about the 'great journey of life' as though it is some deep philosophy, when actually it is an invasion plan.

While it is sad to watch Tom Baker giving such a lazy performance, it does give Romana the chance to be the main character for a change, confronting the villains and even acquiring some companions along the way. Lalla Ward was never a great actress, but there is a sincerity to her performance here that is quite lovely. She knew the children watching take it seriously, so she took her own role completely seriously. In that sense, Lalla understood the dynamics of children's television better than anybody else involved with the show at the time. 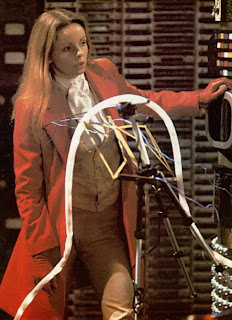 The Nimon looks pretty cheap and clumsy and it is difficult not to laugh at it much of the time. Yet clumsy monsters were not introduced into the show by Graham Williams. Even the Daleks looked a little bit silly. There is something remarkable about the way even the silliest of Doctor Who monsters can still come across as quite chilling. Despite their apparent silliness, the Nimon do have something of a menacing quality, particularly their voices. 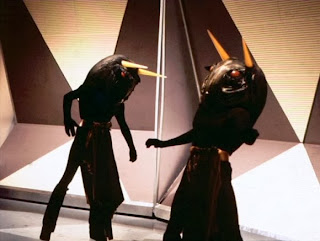 Some of the Graham Williams' stories excel in world-building and we see this here. This story very much feels like a shapshot of a much larger history between these planets. Underworld tried to use mythology to create a sense of epic grandeur, but failed miserably at this. Oddly, The Horns of Nimon seems to actually be more successful at this. Perhaps it is the fact that it does not take itself so seriously, or perhaps it is the operatic look of the sets and costumes.

It is often pointed out that this story was broadcast at Christmas time. It certainly does have a pantomime feel that is appropriate to the festive season. Perhaps that is the best time to watch it on DVD. It's not one of the best stories of it's era, but I don't think it is a bad one either. It's not quite accurate to call it a failure as nobody was trying particularly hard in this period of Doctor Who. The Horns of Nimon is a story that should be enjoyed for just being fun and over the top.

Posted by Matthew Celestine at 03:41