Dr Who and the Daleks Cadet Sweet Cigarettes 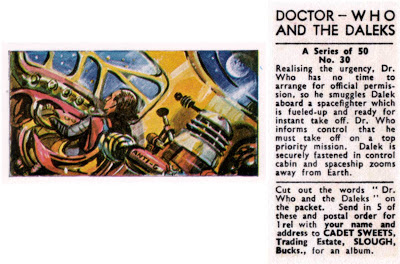 Sweet cigarettes were one of those things that my mother disapproved of. She thought they encouraged smoking. I always enjoyed them when I got the chance to eat them, but it was a guilty pleasure. I vaguely remember the days when sweet cigarette packets contained a picture card, though this was a dying genre. Cool kids in the 80s ate Milky Ways and Smarties, not sweet cigarettes. 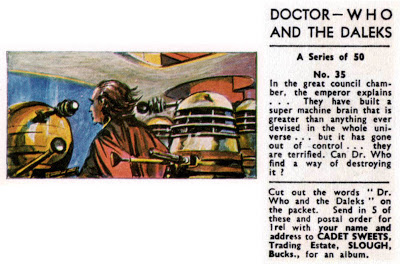 In 1964 Cadet Sweet Cigarettes issued a set of picture cards which told a rather epic story entitled 'Dr Who and the Daleks.' This was not, as its title might suggest, an adaptation of the second Doctor Who serial, but was in fact an original story involving the Daleks (with their egg-headed Emperor) and the Voord.

Some of the artwork on these cards is really beautiful. There are some very impressive space battles and some lovely Sci-Fi landscapes. The Voord look far more impressive in this story than they do in The Keys of Marinus. However, Dr Who bears little resemblance to William Hartnell. We could speculate that this is an unknown incarnation of the Doctor, but there is enough superficial resemblance to Hartnell to suggest that the artist has just done a bad job with the likeness. The Doctor's facial appearance actually varies from one picture to another, showing a terrible lack of consistency.

The prose text that accompanies the pictures is written in surprisingly bad grammar. It comes across like a story written by a nine-year old. Yet the epic scale of this story and its puzzling relation to continuity make it rather fascinating. There is no sign of the TARDIS and the Doctor is seen wearing a spacesuit for much of it. The Doctor is far more physically active than the Hartnell Doctor, which suggests this might be a younger version of the First Doctor. The Doctor Who- Complete Adventures website argues that this is a pre-Unearthly Child story in which the Doctor is on a mission for the Time Lords (perhaps with a Time Ring). If the Doctor's memories of this incident were erased, this would account for his later ignorance of Daleks and Voord. 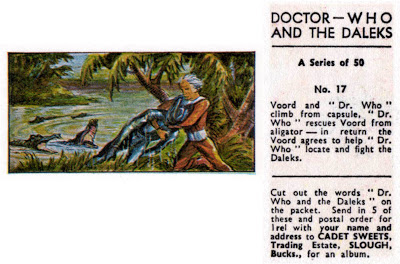 Part of the story involves Earth in the future. It also features Marinus. This creates a problem if we embrace the claim of The World Shapers strip, that Marinus is the same planet as Mondas and the Voord are proto-Cybermen. We could always resolve this with the usual solution that the Marinus here is a 'New Marinus.'

The last surprise that the story leaves us with is the Doctor making peace with the Dalek Emperor and sharing a victory toast with the Daleks. This is quite disconcerting given that the Daleks are generally seen as the Doctor's deadliest enemies. 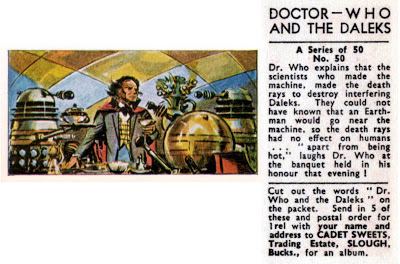 Posted by Matthew Celestine at 05:42