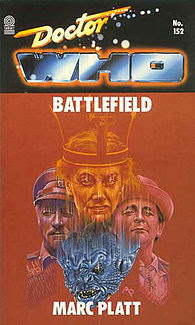 When Battlefield was on television, a lot of my friends at school were watching it. They urged me to watch it, but back then I had no interest in Doctor Who. A year later, I suddenly developed an interest in Doctor Who. Hence, three years after the serial had screened, I read the Target novel without having seen the original. I really enjoyed this book. Despite the fantasy plot, it felt much more realistic and gritty than other Target novels I had read.

The Seventh Doctor run of Target novels featured quite a few that had a much deeper level of literary sophistication. While Battlefield is less experimental than Ian Briggs' Curse of Fenric novelisation, it's prose is very rich. The moment of Lt. Laval's death in particular is beautifully described. Battlefield is a much more straightforward retelling of the original story than Curse of Fenric, yet it still adds considerable richness to the narrative.

The big problem with the Battlefield serial was that it had too many characters. None of them really got the treatment they deserved. The great strength of the novelisation is that Marc Platt was able to add a depth of characterisation to them that was very much lacking in the original. The portrayal of Professor Warmsley, for instance is infinitely better than what we saw in the serial. Mordred becomes a bit more than just a mummy's boy.

The novelisation also treats us to a few glimpses of the strange Thirteen World realm of Morgaine. We also get to see the Merlin incarnation of the Doctor. I particularly like the way the Doctor sees his doom as Merlin as an inescapable fate than he can delay, but never avoid.

On the whole, the novelisation does a much better job than the well-meant but lacklustre serial. Battlefield was one of the brightest ideas in Doctor Who, but one of the most disappointingly executed ones.
Posted by Matthew Celestine at 10:56