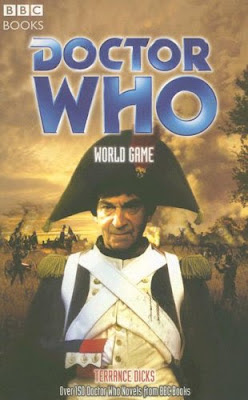 In some ways World Game is a Terrance Dicks' greatest hits. We have his trademark simple prose, references to his televised stories, notably including the appearance of a vampire and a Raston Warrior Robot, interaction with historical figures, skullduggery on Gallifrey and that famous line about the Mind-Probe. If you are a long-standing Doctor Who fan, you are pwobably familiar with all these tropes and love them too. We also get Terrance Dicks' worst literary tendency, with a female companion being threatened with rape.

Yet World Game also does something very interesting. This is the only novel set in Season 6B, that hypothetical period between The War Games and Spearhead from Space. This makes for something quite interesting and different. It also gets the Second Doctor away from Jamie, allowing us to see a different side to him. I am a believer in Season 6B. I think this makes the most sense out of anomalies in The Five Doctors and The Two Doctors. It also allows us a time period in which the events of the Second Doctor TV Comic strips can be squeezed.

Dicks' prose is as simple as ever, but it reads very easily and makes for a light and entertaining read. Yet at the same time, there is a massive amount of historical information squeezed in. Anybody reading this novel is going to learn a lot about the Napoleonic Wars. Dicks has always taken the educational aspect of Doctor Who seriously in his novels. I remember when I was eleven years old, how Timewyrm Exodus inspired me to read lots of books about the Third Reich.

I don't think Dicks quite succeeds in capturing the Second Doctor. As with other Doctors, he tends to make him seem a little too much like the Third Doctor. His companion, Lady Serena was very likeable, even if she was an awful lot like Romana I. I think it was rather a shame that she was killed off.

World Game lacks the drama and intensity of Timewyrm Exodus, but it is still one of Terrance Dicks' best novels and is very enjoyable. The cover with Troughton dressed up as Napoleon is delightful too.

Posted by Matthew Celestine at 04:22