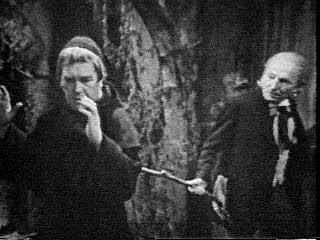 Douglas Camfield is regarded as one of the greatest of Doctor Who's directors and rightly so. What strikes the viewer of The Time Meddler is that it appears to be largely filmed on location, unlike most other Hartnell stories. This is an illusion, however, for this story was filmed entirely in studio. The appearance of lush location filming is achieved through the realistic sets, the moving sky effect and the generous use of stock footage. The Time Meddler's strong visual impact is a testimony to Camfield's brilliance, a brilliance let down only by some clumsy fight scenes.

The Time Meddler is hugely important in setting the direction of later stories. For the first time, we see one of the Doctor's own people and discover that the TARDIS is not unique. In this serial, historical and science fiction elements are mixed for the first time, something that caused a lot of confusion for many viewers at the time. This was a significant innovation for Doctor Who. What is perhaps unfortunate is the fact that this innovation came to be seen as the essential way for Doctor Who to deal with historical themes. Thus, true historicals came to be rejected in the Troughton era. The Doctor Who pseudo-historical has become a predictable genre, with the only real variation being whether the interfering being is a good alien or a bad alien and a lack of any real interest in the historical elements themselves.

The Time Meddler also altered the way in which time worked in Doctor Who. Barring the wobbling of The Space Museum, the show's logic had assumed that the course of history could not be altered. It was not merely objectionable, but impossible. Here in this story, we see a being like the Doctor attempting to alter history and the Doctor appears to believe that he could succeed. In my opinion this was a mistake. While Big Finish have gone to town on stories about altered timelines and the new series has followed suit, such notions appear very infrequently in classic Doctor Who. It has been pointed out by fans that the Doctor appears inconsistent in viewing earth's history as sacred, but freely interfering in the destiny of alien worlds and future human societies. I would argue that the Doctor's willingness to interfere in alien worlds actually supports the idea that history cannot be altered. The reason that the Doctor has no fear of toppling Helen A's tyranny on Terra Alpha is because he knows he cannot change history and his success is already a part of history. If he is unaware of the future of Terra Alpha (and in general, the Doctor shows a limited awareness of future human history), then he can at least try, knowing that he cannot alter history. This flys in the face of the accepted understanding of Pyramids of Mars (I have my own theory to explain the desolate Earth in 1980), but it makes sense of a good deal of classic Doctor Who. The Time Meddler can be blamed for the unfortunate idea that history could be altered at any moment.

The Time Meddler is very much dominated by the two conflicting personalities of the Doctor and the Monk. The Monk is an highly unusual villain in being rather likable and it is hard not to feel a lot of sympathy for him. This is very much enhanced by how unlikable the Doctor comes across in this story. He shakes with rage at the Monk's activity and comes across as a bit of a bully. It is interesting to note just how violent the Doctor is here, brawling and hitting people with clubs. While we are used to liking the Doctor, I rather find the Doctor's meanness in this story very enjoyable.

It is rather striking how manipulative the Doctor and companions come across in this story. They appear to the Saxons as allies, helping them deal with the 'Viking spy.' Yet in reality they are trying to ensure that these people are invaded by Vikings, an event in which they might suffer. The story does not deal with this moral tension at all.

I don't care much for the companions in The Time Meddler. Steven's first appearance as companion proper has him coming across as very thick and obstinate. I have never liked Vicky, but here she comes across as especially bossy and irritating. While we get a good performance from Alethea Charlton's Edith, the Saxon characters are uninteresting and the Vikings very unimpressive. These historical elements of the story lack any real interest in themselves. Yet whatever its faults, The Time Meddler was an important landmark in the history of Doctor Who and is visually quite delightful.

Posted by Matthew Celestine at 05:43