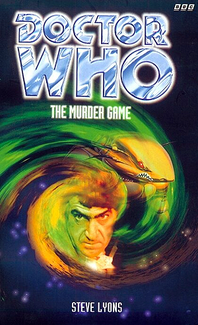 "In census records from 1942 on, I found references to a Ben Jackson and a Polly Wright, born in close proximity to each other. Both in London, England, in fact. Their descendants would currently be-"

Although I don't see myself as being 'in it for the monsters,' I wanted to read this book to encounter the Selachians again. I heard the Selachians in Lyons' Architects of History, the concluding part of the brilliant Klein trilogy of audios. You don't get many genuinely aquatic monsters. The Seas Devils are more amphibious than aquatic. The Selachians are one inspired monster race. They have a convincing backstory as well as an appearance that is easily visualized. Like the Daleks, they are small, pathetic creatures beneath their armour. What is particularly interesting is that they chop their fishtails off in order to fit into their armour better. Their spacecraft is also magnificently described.

Selachians aside, is The Murder Game a decent novel? As with The Space Age, it does seem to lack the brilliance that Lyons displayed in the Virgin New Adventures. The Murder Game has it's defenders in fandom, but plenty of detractors too.

The setting in a murder mystery party tells you instantly that people are soon going to start dropping dead. It's perhaps a little predictable. While there is plenty of action in this book, the pace still feels rather slow and dull. It does not help that the cast of characters is so surprisingly boring. One does not feel like caring about any of them, except the regulars.

Like Gary Russell's Invasion of the Cat-People, this novel is set in between Power of the Daleks and The Highlanders. To my mind this is a good choice, as Jamie got plenty of screen time. This novel gives us a chance to look a bit more deeply at Ben and Polly. It does so well. The two characters are very well portrayed. We also get a hint about their future together. I like the way the novel makes Polly hilariously anxious about seeming to be out of date.

The Second Doctor is brilliantly portrayed. He has all the fun, as well as the fearfulness and the quiet heroism. There is an hilarious moment when he appears in drag! We also get a brilliant physical description of the Second Doctor- "He made a face like he was chewing a marble."

One moment that is so ill-chosen that it almost threatens to overshadow the book, is when the Second Doctor manages to steer the TARDIS to materialize on board the Selachian spacecraft. It is simply inconceivable that this could happen in the Second Doctor era. That Lyons had to resort to that to resolve his plot is a serious failing in his writing.

I have read worse novels than The Murder Game and it does have some great elements, but it really does leave one disappointed.
Posted by Matthew Celestine at 10:21