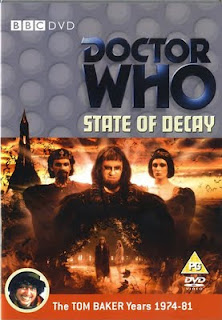 The Fourth Doctor, Romana and Adric discover a coven of vampires in E-Space.

Disconcertingly, after the attempt to break into 'hard science' territory with Full Circle, we are back in Hammer horror territory with a story about old fashioned fanged vampires. This story seems like it is in the wrong season and ought to be a Hinchcliffe-era story (Terrance Dicks originally wrote it to open Season 15, but it got shelved until it was picked up again by the economically-minded John Nathan Turner). What sets it apart from all those Hinchlife Hammer re-workings is its magnificent production values which put the Seventies stories to shame.

I find it remarkable that fans , in general, do not consider this story to be a classic. The usual verdict tends to be that State of Decay is a good story, but not that interesting. In my opinion, it is better than Brain of Morbius, much better than Pyramids of Mars and easily the equal of Horror of Fang Rock (which Dicks hastily wrote to replace this story in Season 15). Like all of the classic stories it has faults, but these do not stand out because of its well-paced narrative and highly effective production.

Terrance Dicks has a reputation as a 'Traditionalist' Doctor Who writer and certainly State of Decay takes many stock elements of Doctor Who- tyrants needing to be overthrown, 'Creature Feature' horror the value of scientific knowlege and ancient evil. This takes the risk of cliche, but Terrance Dicks knows them well enough to make them work. The revelation that the tower is a spaceship is brought out early on in the story. Other Doctor Who writers would probably have made this overly dramatic and brought it out towards the end, under the misguided notion that this is something of great interest to the viewers. State of Decay has a much faster and more exciting pace than the Seventies stories in a similar style. Dicks was a master of his craft.

A good deal of Doctor Who fails to generate atmosphere and this is always a big failing. In contrast, State of Decay is dripping from bucketloads of atmosphere. The woodland and the gothic sets both contribute to this, as well as the scripts descriptions of the ancient menace involved. This is the perfect story to watch on a cold, dark winter evening, with a glass of red wine or a pint of ruby ale in one's hand. Thanks for this go to Nathan-Turner's push for strong production values. We see some marvellous camera-work and effective use of location filming, as well as some brilliant sets- the gothic tower and the rebel HQ with its abandoned machinery.

I love the fact that this story ties into the lore of Gallifrey. The idea of the powerful Time Lords having an ancient arch-enemy in the vampires is very inspired. Despite the clear 'Trad' leanings of this story, the Virgin New Adventures have been considerably inspired by it. As I have said on this blog, I am a huge fan of Neil Penswick's The Pit that deals with the theme of horrors from the Gallifreyan Dark Times. It is not made clear in that story whether the Yssgaroth Old Ones are the vampires or some other Lovecraftian extra-dimensional monstrosity. Strangely, when Terrance Dicks himself used this story in his New Adventure novel, Blood Harvest, he re-wrote the background of State of Decay, introducing the idea that there were far more inhabitants of the planet including other vampire lords. I suppose this makes a bit more sense that their being just one village on the planet.

I think that it was a very smart move to leave the Great One largely to the imagination of the viewer. Imagined terrors are always better than clumsy monster props and suits. We could probably have done without the fleeting image on the scanner, though I think the claw emerging from the ground is more effective than some people allow.

The vampires are brilliantly characterised, with the cunning and ambitious Aukon and the more venal Zargo and Camilla. Aukon seems to be the real power amongst The Three Who Rule. He also comes close to stealing the show with Emrys James' camp but chilling performance. Their final disintegration is very convincingly done. The peasents are a little cliched, but they fit perfectly into the pseudo-medieval world of the story. 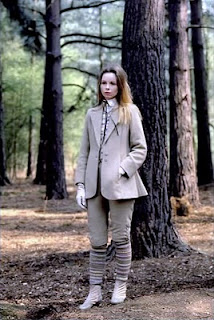 Tom Baker and Lalla Ward are at their best, with Romana showing genuine terror and the Doctor clearly chilled by the thought of horrors from the Dark Times. There is plenty of humour and Baker's 'St. Crispin's Day' speech is a classic moment. Adric is a little annoying, but it is more interesting to have a companion who does the dirty on the Doctor instead of turning into an instant hero. What makes him work here is that he gets an instant telling-off by Romana. Adric's blaming his brother's death on the Doctor would probably have evoked sympathy from the soft-hearted Fifth Doctor. Adric was a companion for the Fourth Doctor and Romana and needed them to keep him in line. Without them, he became a nuisance.

There is something of an irony in this story in that while it supposedly holds out the value of learning and scientific knowlege, in the end it is the brute fore wielded by an ex-guard and his fellow rebels tha brings down the vampires misrule. The scientific studies of Kalmar are shown to be rather useless.

Two obvious faults with State of Decay stick in my mind. Firstly, what in E-Space is the 'Wasting?' It sounds an intriguing idea, but it is never explained. It reminds me a little of 'The Nothing' from the film NeverEnding Story, a kind of unstopable force of existential decay. What the theologian Karl Barth had in mind when he wrote of the 'Nothingness.' Or maybe some kind of cosmic terror, a vague entity we might see in a H.P. Lovecraft story, like The Colour Out Of Space. Sadly, we never learn anything about what it is meant to be. The second fault, is the bizarre desire of Kalmar to return to earth. There has never been any suggestion in the story that his people are from earth; they are certainly not descendants of the Hydrax crew.

Maybe its because I am a bit of a Goth at heart, but I love this story despite my preference for more 'Rad' elements in Doctor Who.
Posted by Matthew Celestine at 06:55