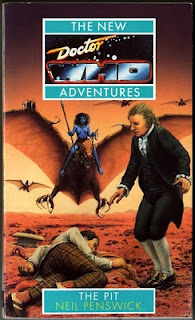 The Seventh Doctor and Bernice encounter horrors from the Dark Times.

I am totally fascinated with 'The Pit.' Its not the most higly regarded of the New Adventure stories and it is not the easiest one to read. It is totally lacking in humour and lacks any pleasent characters. The Doctor is portrayed as being in a state of depressed hopelessness. It does not make for an enjoyeable story. Yet I feel that it is almost my favorite of the New Adventures. Maybe it helped that I was on holiday, staying with my old folks at Hastings at the time I read it. I read a good portion of this book sitting in my favorite place in the world, the White Rock hotel bar, drinking delightful ale. Maybe because the book is so depressing, you have to be in a relaxed mood to read it.

The main reason I like this is Lovecraft. H.P. Lovecraft, the master of darkness! I am a huge Cthulhu Mythos fan. The whole reason why I rediscovered Doctor Who was that I realised how similar the two can be. The New Adventures effectively incorporated Lovecraft's Great Old Ones into the Whoniverse in All-Consuming Fire, but this book, written before then, is much more Lovecraftian in style. Not only does it feature ancient, extra-dimentional monsters described as 'Old Ones' who are worshipped by secret cults, but it has that overwhelming sense of cosmic hopelessness. The Doctor, normally invincible and indomitable, is reduced to utter impotence. It totally deviates from the pattern of Doctor Who. If every New Adventure novel was like this, we could not take it, but this one gets it right.

I like the exploration of the 'Dark Times' of the Time Lords history. I think this is the most fascinating aspect of Doctor Who and as long as the mystery is maintained, it is worth exploring by writers.

The inclusion of William Blake as a character is a brilliant choice, even if his entrance into the story is not very well explained. He represents the same liberal, democratic values as the Doctor and seems them utterly wiped out in the dark misery of the future. Lovecraftian Cosmicism again. Unlike the Doctor's religiosly indifferent companions, he asks the Doctor theological questions. This makes perfect sense. A book dealing with such vibrant religious imagery needs a character who can react to it. It has been suggested that the depiction of Blake is a lot less colourless than the real William Blake. I did find it odd that he does not mention his wife in the book. Being separated from her by time and space ought to be on his mind.

Maybe one reason I love this story and most fans hate it is that I am religious and have studied theology to PhD level. It is a book using religious themes in which many characters are religious. It has a spirituality missing from most Dr. Who stories.

My favorite moment in the story is the scene where an Yssgaroth is seated on a throne. It first appears like a lamb, then turns into a winged serpent-like creature with a multitude of eyes. The imagery here is brilliant! It is taken straight from the Book of Revelation. It is like a scene that William Blake would have painted. It has been suggested that having a demonic being appear as a lamb is blasphemous. I don't thing so! I have no problem with the powers of evil masquearading that way. In fact in the Book of Revelation, the second beast or false prophet appears like a lamb (Rev 13:11).

Ignore the people who say this is the worst New Adventure. It is one of the best. Track down an old copy.
Posted by Matthew Celestine at 05:14