The Fourth Doctor and Romana find themselves in a different universe.

It is in Full Circle that we really see the emergence of both producer John Nathan Turner's vision for an higher standard of production values and script editor Christopher Bidmead's vision for a more serious hard science approach to Doctor Who. Fans will be eternally divided on whether the changes Nathan-Turner and Bidmead brought were for the benefit of the show. My own feeling is that the changes were necessary and inavoidable. As much as I love so much in the Graham Williams era, the show had gone down a blind alley. Had a new Doctor (and Tom Baker inevitably needed to be replaced) taken over and the show continued in the comedy vein, we would only have seen it sent up futher to the point of ridicule. Doctor Who simply had to become more serious or it would have died. A lot of things in the JNT era were really bad, but love him or loathe him, JNT manage to breathe life into the show so that it could continue through the Eighties.

Visually this story is a triumph of JNT's new production values. The camera and location work is amazing. The mist in the swamps is atmospheric. After the hilarious monsters of Season 17, we finally have some well designed monster costumes for the Marshmen. The Starliner is well designed and the cliche of corridors is actually used to make a subtle point about the Starliner's occupants. The costumes are excellent too. The spiders are obviously made of plastic, but never mind.

Full Circle is an intelligent story. A good deal of thought has gone into the concept. In terms of science, the idea of evolution suggested here does not make such sense. For all the desire to ground Dr. Who in scientific concepts, the notion of evolution we get here is rather fantastical. I am a fundamentalist Christian and have serious doubts about evolution (though I don't dismiss the idea), but it I do find it irritating that evolution is so often misunderstood by science fiction writers.

The plot is perhaps not that inspired. It was daring of writer Andrew Smith to create a Doctor Who story without a villain, but I think it does result in a certain lack of conflict. Hence, we are left with a story that creates very little tension.

Tom Baker gives a nice understated performance, showing compassion to the young Marshman and showing real anger when challenging the Deciders. Romana is superb (except as a Marshwoman) coming across genuinely as a Time Lady. She shows complete confidence when the TARDIS is invaded by the Outlers, relieving one of them of his knife and then giving it back! 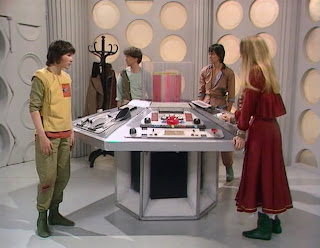 As everybody knows, this story introduces the much hated Adric. He can be a bit irritating, especially his inability to walk properly. However, in Season 18 he had the Fourth Doctor and Romana to shout at him and keep him in line. He only becomes unbearable with the softhearted Fifth Doctor.

The Outlers are not terribly impressive. Their inability to steal fruit makes one wonder how they can imagine surviving on their own. The Deciders are well conceived and acted.

On the whole, this is a decent story, even if not the most exciting.
Posted by Matthew Celestine at 06:06