Searching for the third segment of the Key to Time, the Fourth Doctor and the first Romana encounter an alien lady masqerading as a Celtic goddess.

Fan opinion has not been kind to this story, but I just love it.

What have fans got against this story?

The first part of the story is good, evoking a feeling of gothic horror ('like in the good old Hinchliffe days'), but it turns lame when the Doctor goes into hyperspace and it turns into a silly space opera.

What would be the point of a Hinchliffe-style gothic horror story? All that had been done before. What we have is instead a send-up of Doctor Who Gothic with all its cliches subverted (see below).

Okay, so the parts in hyperspace could have been done better, but they are still fun. The Megara are hilarious with their Good Cop, Bad Cop routine. You must have smiled when Tom Baker pulled on the barrister's wig that he happened to have been carrying in his pockets. Stones of Blood defies both convention and expectation in its change of genre and style.

Cessair of Diplos' motives are never explained. It is implied at the beginning that the Black Guardian might be involved, but it is never explained whether Cessair is his agent or not.

Yes, the lack of motivation for Cessair is a weakness in the plot. However, a lot of things in Doctor Who do not make a lot of sense.

It is a refreshing change to have a villain that is not only female, but is also not particularly interested in destroying humanity, taking over the earth or causing cosmic havoc. Vivien Fay of Rose Cottage doesen't want to conquer the universe, she just wants to eat sausage sandwiches with her lady friend and be a positive role model for young girls.

The sequence where Romana is lead to a cliff edge by an unseen image of the Doctor is very badly done.

Yes, this is a weak part of the story. This was unfortunately caused by Tom Baker refusing to pretend to be evil.


So the story has its faults, as do many better-loved stories, but I would maintain that Stones of Blood is a story of real quality.

What really makes the story stand out is its uniquely feminine quality. Its supporting cast is almost entirely female. Also unique is its heavy use of a domestic setting in Rose Cottage (and all that talk about tea and sausage sandwiches..) and subtle (?) lesbian subtext.

Stones of Blood sends up many of the conventions of gothic horror and Doctor Who. For instance, the Doctor finds himself tied up ready to be sacrificed and needs to be rescued by a woman. And of course, the shoes. Romana's trouble with shoes is such a wonderful moment of realism in Doctor Who. Don't you ever get irritated by the unrealism of so many companions running and climbing in high heels without any apparent difficulty? Yet here we have Romana realising that her high-heeled sandals are a bad idea and opting to go barefoot. The only other example of this shoe-consciousness is the Rachel, the female scientist in Remembrance of the Daleks holding her heels having climbed into the Dalek ship in her stocking feet. 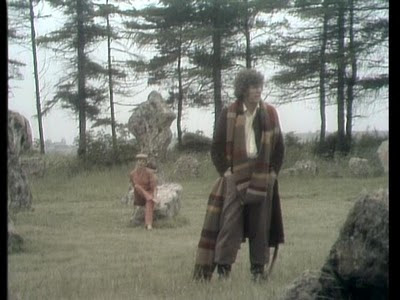 Tom puts in a splendid performance. Mary Tamm also gives a superb performance. And she looks absolutely fantastic in that peach jumpsuit and Burberry hat (with the already mentioned high-heeled sandals). Such an odd choice of outfit, yet she looks so elegant. When I watch Stones of Blood, I can't help feeling that I actually prefer Mary Tamm to Lalla Ward. 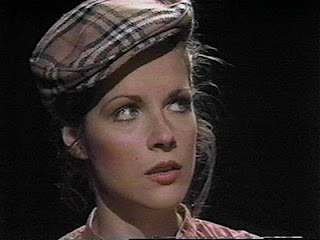 Few fans would deny that Beatrix Leahman is marvellous as the eccentric Professor Rutherford. It takes real talent not to make an eccentric scientist into a cliched caricature. Rutherford has real chemistry with the Doctor and she is one of the great unused companions.

Susan Engel seems a little uneasy in her role as Vivien Fay and ends up overplaying it a little at times. She is rather obviously a villain when she first appears, though she is very elegant and I think even classier than the Countess Scarlioni in City of Death. When she sheds her human disguise and reveals herself as Cessair of Diplos, she looks fantastic, with her shiny green skin and Jewish-style kerchief. 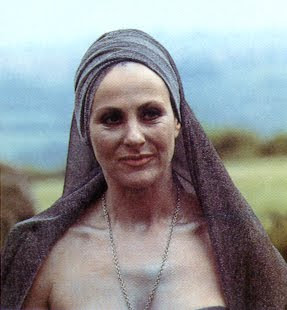 As mentioned above, it is commonly complained that as a villain, Cessair of Diplos lacks a motivation. While this does seem to be a plot failing, it does make her more interesting as a character. She shows no interest in ruling the world and apart from the mystical warning at the beginning of the first episode, there is no evidence that she is an agent of the Black Guardian. Significantly, we learn that she has never demanded human sacrifice prior to the Doctor's arrival. Her malevolence towards the Doctor seems to be motivated by the desire to protect herself, rather than out of cruelty. Cessair also does not seem to have lived a life of luxury and extravagance as the Jaggoroth does in City of Death. She appears to live a life of very modest rustic spinsterhood, even if her clothes are rather fashionable. When I read the Target novelisation at the age of ten, I was shocked to learn that an alien being would be a Brown Owl! The thought of an alien villain leading a group of Brownies just seems so surreal. There is no indication that any children have been molested, so her being a Brown Owl seems to indicate a caring and gentle nature. It is therefore hard not to identify with Rutherford's sympathy for Vivien in the end.
Posted by Matthew Celestine at 05:51