12 Reasons He Really Is Called Doctor Who 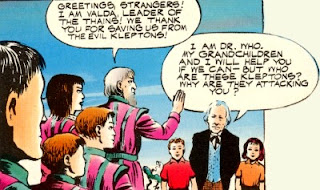 One of the really irritating cliches among fans is the insistence that the Doctor is not called Doctor Who. Various people involved in the production of the show, such as Matthew Waterhouse, David Tennant and the late Barry Letts have repeated this cliche. It is true that the Doctor is generally called the Doctor, but there is substantial evidence that Doctor Who is either the Doctor's name or a pseudonym that he has sometimes used:

1. If Doctor Who is not his name, why is the program called Doctor Who? If it was a question, not a name, there would be a question mark in the title.

2. The Doctor is was named as Dr. Who in the credits until John Nathan-Turner. David Tennant showed of his supposed fan credentials by asking for it to be changed to 'the Doctor' but this should not impress anybody as throughout much of the history of the show, the credits give it to Dr. Who.

3. In The Gunfighters, the Doctor is asked 'Doctor who?' to which he replies 'Yes, quite right.'

4. In The Highlanders, the Doctor calls himself 'Dr. Von Wer' (who in German).

5. In The Underwater Menace, he signs his name as Dr W.

6. The computer WOTAN refers to the Doctor as Dr. Who in The War Machines. This might be the case of WOTAN confusing a nickname as a proper name, but it is clearly a nickname that the Doctor accepts and acknowleges.

7. The second story of Season 7 is titled Dr. Who and the Silurians.

8. The Doctor is always called 'the Doctor' onscreen. However, he has used other names such as Theta Sigma (when he was at the academy) and he occasionally uses the alias John Smith. It is not clear that he has used the title 'the Doctor' as a name before the events of The Unearthly Child (Susan always calls him 'Grandfather'). It is perfectly possible that if 'Who' is not his name, he has used this as an alias or pseudonym.

9. Who is used in the registration numbers of Bessie and the 'Whomobile' (never called this onscreen). So Who does have significance for the Doctor.

10. Most fans hate the question mark logo that John Nathan Turner imposed on every Doctor during his time as producer, but this is onscreen evidence for mystery being associated with the Doctor's name. In Remembrance of the Daleks, the Doctor even has a calling card with a question mark logo.
11. He uses the name 'Dr. Who' in the TV Comic strip. Most fans assume the TV Comic is uncanonical, but is this assumption justified? It follows the television series more closely than the BBC Wales series and the Kleptons appear in the novel Placebo Effect.

12. In the Peter Cushing movies, the Doctor is called Dr. Who and even has grandaughters called Susan Who and Barbara Who. Not canonical I know, but it does demonstrate that people used to assume he was called Doctor Who and this assumption was left unchallenged.
Posted by Matthew Celestine at 06:40