Season 15 is one of the less well regarded seasons and this story is considered to be one of the disasters of that season. Personally, I don't dislike Season 15, but this story is rather weak. It is hard to find much that is really good about this story.

The opening has something of a Space 1999 feel. The new direction of Doctor Who as space opera, instead of gothic horror is firmly established in this story. It goes on to give us a daft sci-fi take on cloning. These clones can only survive eleven minutes, though it seems an incredibly long eleven minutes!

None of the guest characters are interesting or believable, though K9 gives a great debut and Frederick Jaeger gives a reasonably good performance as Professor Marius (apart from his silly German accent).

As much as K9 is a bit silly and a post-Star Wars robotic cliche, I cannot quite bring myself to dislike him. It is good to see a new element introduced into the Doctor Who format.

The spaceship model work is good, but the set designs are rather unconvincing. The hospital seems a bit deserted.

As well as Space 1999, the story takes inspiration from Fantastic Voyage, with a journey through the Doctor's body. This particularly unconvincing, as it appears to have an environment in which the two clones can breathe and walk about. 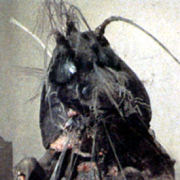 The nucleus' physical form when it appears full size is rather funny, but I like it. Nothing better than a giant crustacean.

I think what I like most in this story is the moment when Leela approaches a cold and grim hospital receptionist. The far future is not that different!
Posted by Matthew Celestine at 12:03