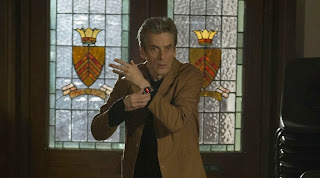 Given the way the previous episodes have been set up, it was inevitable that Danny Pink's first meeting with Dr. Who was going to take a definite shape. We were basically waiting for an episode in which Danny finds out about Clara's double-life and is completely mind-boggled. We knew he was going to say something along the lines of "I just don't know who you are any more." We knew the Doctor was going to disapprove of him because he was a Soldier (shock horror!), but he would prove himself to be a decent sort of chap by saving the day. The Caretaker does all this and it's really rather predictable. It felt like a painful exercise to get through.

So Dr. Who has a big problem with soldiers, no not just soldiers, to be precise ex-soldiers. It seems a bit odd given he was happy to travel with Harry Sullivan, a serving naval officer, and Sarah Kingdom, a serving military intelligence agent. He also seemed to get on fine with Wilf. Not to mention spending a lot of time hanging around with all those military personel from UNIT. We are never actually told that Ian Chesterton, also a school teacher was an ex-soldier, but there is quite a bit of evidence that he had done some military service, as well as the likelihood that he had done national service. If the Doctor does not like ex-soldiers, he is going to have an horrible time if he ever visits Finland, Brazil, Singapore or anywhere else where they have compulsory military service. You can just imagine the Doctor going to Singapore and saying "No! No! There are ex-soldiers everywhere! Ah!"

I'm getting tired of the capitalization of the word Soldier that we are seeing in Doctor Who. As I said regarding Into the Dalek, they are not some special category of human beings. They are just ordinary people rightly or wrongly doing an extraordinary job that people have done since the dawn of history. I think this comes down to the remoteness of the military from the lives of middle-class television writers, especially given how the armed forces have come to recruit predominatly from the working-class communities. It is not helped by campaigns like Help the Heroes which seem to sentimentalize and infantilize members of the armed forces. Notice how often the army are referred to as 'our boys.'

In short, Dr. Who's attitude to Danny Pink seems unreasonable. The unreasonableness of it makes his objections and antagonism toward him seem rather false and unconvincing. Worse than that is the awkward racial sub-text of the Doctor, a white man, making prejudiced assumptions about the intelligence of a black man. No doubt the writers were intending this to be on account of Danny being a Soldier, but the racial sub-text cannot be ignored. What is more, in the same episode we get a black girl who is a 'disruptive influence' who the Doctor casually suggests might go shoplifting. Along with a white police officer harassing a couple of black kids. Call me a Sandiferian or a Jack Grahmite if you like, but I found this painful. This is of course, from the same producer who gave us Mels, the black delinquent incarnation of River Song and an episode in which the rare inclusion of a group of black characters turn out to be a dim-witted bunch of petty crooks.


We get to spend a bit more time with Danny Pink in The Caretaker and it's not a fun experience. What we have seen so far seems like a rather surly and miserable character who can't cry convincingly. Now it seems that in a relationship he is rather controlling and manipulative. It's getting really hard to warm to this bloke.

This episode was fun in places, and the acting and direction was really quite good, but I found it rather depressing on the whole.


Posted by Matthew Celestine at 06:24