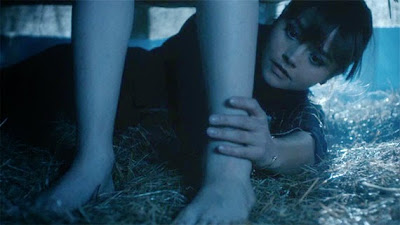 Listen draws heavily on all the Moffat tropes that we have become very used to; frightened children, characters meeting other characters as children, sitcom dating and monsters that exist beyond the boundaries of human perception. Nevertheless, despite the familiarity of these tropes, the finished product is something that comes across as quite surprising. Arguably it's not bad television, but I do not very much like it at all myself.

The episode begins with the Doctor speculating about whether unseen beings might be listening to him. He engages in some very illogical, if intuitive, thinking. His thoughts that there might be things listening to him when he speaks alone come across to me as rather childish. I'd like to think that Dr. Who had something more intelligent to say.

Everybody has the same nightmare? I can't remember ever having a nightmare about something scary being under my bed. My nightmares have involved things happening to me within the dream, rather than things located in my bedroom. Perhaps when I was younger I might have been afraid of unknown terrors being in my room or in the house, but being aware that I was in bed, these were not nightmares as such. Maybe this is just semantics and the Doctor is not talking about nightmares, but about nightime fears in general. It seems a bit clumsy though.

Once again, Moffat follows the odd reasoning that because Doctor Who is a program for children, it should feature children and deal directly with chidhood fears. I think this probably puts off a lot of young viewers. Children are not generally interested in watching other children, unless it is a child they want to indentify with. Children will enjoy watching a child going off and having adventures, doing the things they would like to do themselves. They are less likely to enjoy watching a child who is afraid of the dark, which will either remind them of their own fears or else be considered a bit wet. I rather think the show has lost something with the current policy of only having adult companions in their twenties. Why can't we have a teenage companion like we had in the Sixties?

We get a glimpse of the Doctor's childhood. It's an odd sequence. It doesen't really fit with anything we have previously been told about the Doctor's childhood. The couple talking about him don't seem much like Lance Parkin's Ulysses and Penelope. But I'm not going to wrestle with the continuity questions, as I don't consider the New Series to be canon.

It is nice to get a reference to the Hartnell era in this story with the line 'fear makes companions of us all,' but I can't help feeling that line is reduced here to mawkish sentimentality. The point of that line was that in that story, the Doctor and Ian and Barbara were effectively enemies. Dr. Who was a dangerous figure who kidnapped people, yet circumstances meant he had to form an alliance with the people he had kidnapped.

This kind of story rests on the assumption that Doctor Who is all about terrors entering the domestic space. Moffat takes the whole idea of 'Yeti in the loo' to the next level. A lot of people see Doctor Who that way, but I don't. It's an idea about Doctor Who that is a far cry from the show in the Sixties, in which the Doctor and his companions went to places and had adventures. Stories of this kind, which focus on domestic terrors usually at least offer some kind of monster. This does not offer one at all. It is not even certain that the thing in Rupert's bedroom really is an entity at all and not just some psychological manifestation. This is simply a story about fear itself. That might be an interesting idea, but as a Doctor Who story feels rather unrewarding and falls a little flat. This feels far too introspective a story.

Posted by Matthew Celestine at 07:02