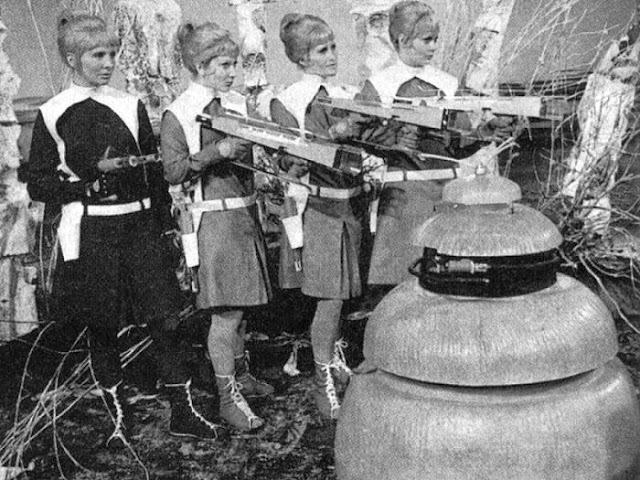 I reviewed Galaxy Four quite a long time ago, but having watched the rediscovered episode three and the new reconstrution on the Aztecs DVD, I thought I ought to write something about it.

The reconstruction on the DVD is very impressive, despite the scarcity of material. It's better than the Loose Canon recon and better than many other recons with far more available photographic material.

I am struck how much this is a story aimed at the kids. Not in the way that today's show aims stuff at children, with dumb laughs and non-stop action, but with a simple plot and simple morals. As I said in my previous review, there is an element of fairytale (not the Disney or Moffat style) in these Hartnell stories.

The recovered episode demonstrates that Stephanie Bidmead's performance as Maaga is less than impressive. As Lawrence Miles and Tat Wood say, she comes across as a "slightly irked school dinner lady," rather than a villain with true menace.

I think the Drahvins are a future offshoot of humanity. Maaga strongly imples that she (unlike her soldiers) is human. That means that this story, like a number of other Hartnell stories is set far into the future. For some reason, the First Doctor seems to end up in the far, far future far more often than his later incarnations.

I still feel very sorry for the Drahvins who are left to perish with the dying planet. I wish Dr. Who could have found a way to save them.


Posted by Matthew Celestine at 11:52