The Web of Fear 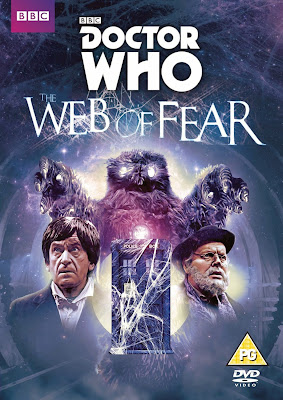 As it is a Troughton base under siege, featuring a classic monster in England, with Lethbridge-Stewart making an appearance, The Web of Fear represents for some fans the very ideal of what a Doctor Who story should be. For those fans, the rediscovery of this story (with just one episode still missing) must have seemed like a dream come true. I remain unconvinced that this story is in any way a classic or a particularly great story, but it was good to be able to finally view it.

There is always an element of paranoia in base-under siege stories, but The Web of Fear seems to take it to another level. Nobody trusts anybody in this story, apart from the TARDIS crew who trust each other, Professor Travers who trusts the TARDIS crew and Travers and his daughter trust each other. Anybody else could be an agent of the Great Intelligence. For much of the story, it creates a sense of claustrophobia, particularly combined with the underground setting, but at some point, the tension starts to get tedious. This is not helped by the six-part length of the story. It is uncomfortably padded out.

This story is famous, of course, for having the first appearance of the Brigadier, then just a Colonel. It has been pointed out by many that he seems a quite different character to the one we meet in the UNIT stories; though there is a pretty big difference between the portrayal of the Brigadier in Season 7 and the rest of the Pertwee era. For me what was most striking and surprising about the Colonel was his readiness to believe that the Doctor really had a machine that could get his men out of the Underground. This contrasts remarkably with the absurdity of his scepticism in the UNIT stories, most especially in The Three Doctors.

The return of Professor Travers brings with it pseudo-companion Anne Travers. Anne is a likeable and intelligent female character, who is arguably in some ways perhaps a prototype of Liz Shaw. Her relationship with her ageing father is nicely portrayed. According to the novel, Millennial Rites, Anne Travers goes on to succeed Rache Jensen as scientific adviser to the Cabinet and helps to establish UNIT. With the presence in the serial of a pseudo-companion, Jamie and Victoria are left a little bit redundant at times, but in the case of Victoria, that is probably not a bad thing.

It is quite remarkable how similar this story is to Fury of the Deep. Both stories about a mysterious intelligence that takes control of humans and which manifests itself as foam. I very much prefer Fury from the Deep, as parisitic seaweed is more interesting than robotic Yeti.

The monsters in the London Underground are Yeti, they might as well be Cybermen or Ice Warriors. Shooting people with web guns is not a particularly Yeti-ish thing to do. Rather than strange mysterious monsters of the mountains, they are standard sci-fi robot monsters. What we get in this story is the arrival of the worst idea in Doctor Who, the 'Yeti in the loo' theory. This notion holds that a monster is inherently more interesting for being placed in a mundane setting. This is an idea that tends to lead to ludicrous plotting, as well as a lack of atmosphere. A Yeti on a misty mountain is scary; a Yeti in a loo is at risk of seeming rather comical. Unfortunately, the writers of the present series of Doctor Who have been rather too attached to this kind of story. For all it's good points, Web of Fear has to take the blame for this.
Posted by Matthew Celestine at 04:23