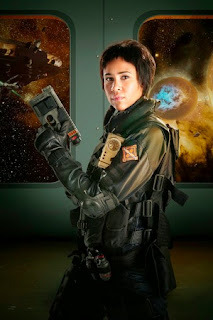 Non-British viewers may not be aware that soldiers teaching in schools has a political context. The present government went through a phase of trying to re-train military personnel as school teachers. A large part of the logic behind this was the idea that boys just need tough male rolemodels to look up to. This idea is nonsense; boys don't see male teachers as rolemodels, they hate their guts because they are invariably stricter and meaner than female teachers. There was a former army captain teaching at my school. If pupils got on his wrong side, he would take them outside and shout and scream at them. I liked him, but most of the pupils hated him. Our government even floated the idea of having entire schools run by ex-soldiers. These would be particularly aimed at naughty kids who couldn't be handled by other schools. The idea was absurd. Even if they recruited enough ex-soldiers (leaving aside the potential indirect sex discrimination in recruiting from a source that is predominantly male), it would never have worked. Right-wing people like to imagine that parade ground orders are going to straighten out unruly boys, but the reality is that a lot of kids today would just tell the ex-sergeant to fuck off, if not punch him. And what could the poor veteran do? He can't punch them back or send them to our military prison in Colchester.

But enough about soldiers for the moment.

Like the previous story, there is not much for the kids in this one. This continues the dark and adult tone. Peter Capaldi is showing himself to be a pretty ruthless and grim Dr. Who. I still find myself struggling at times to understand what he is saying. Am I really the only one having this problem?

This story is a typical attempt to do a story that feels like a classic series story, complete with a Famous Monster. It does a better job of this than Cold War or Victory of the Daleks, but on the whole it feels a bit unoriginal and uninspiring. It seems to follow Dalek rather too closely (as did Cold War), though with a strong dose of Journey to the Centre of the TARDIS. The idea of a good Dalek is nothing new and can be traced back to Evil of the Daleks, a story that was followed up in the 8th Docctor comics. Star Trek fans will also be reminded of a certain story about Borg.

I don't think the Daleks work any more in Doctor Who. We're continually told that they are the most evil creatures in the universe and that they are Dr. Who's worst enemy, but we never quite see this backed up. It's all show and no tell. The visual expectations of television today make it impossible to do the kinds of stories that would really show the evil of the Daleks on a feasible budget.

As Phil Sandifer has said in his review, Dr. Who's question "Am I a good man?" is a bit unearned. At the start of this episode, the viewer has not seen enough of the Capaldi Doctor to form any kind of judgement.

Danny Pink could be an interesting character, but his crying looks really false and unconvincing. Real crying generally does not look nearly that dignified, especially from people going through mental anguish.

I don't very much like the way soldiers are being talked about as a particular kind of human being. Of course, military experience can radically change a person's outlook and behaviour, nevertheless there are some countries where everyone has been a soldier as a result of compulsory military service. We still have a generation alive who went through the horrors of a world war. Warfare has been a universal constant of human existence and a large proportion of the human race has just got on with the business of war and fighting. Soldiers are people like you and me, not some kind of weird alien beings.

Posted by Matthew Celestine at 10:09