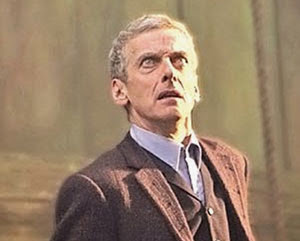 Another season of Moffat-produced Doctor Who and we are back in boredom-land again. Well, not quite. This time we have a new Dr. Who. And what's more, the story is not too bad. Like an elderly couple describing their holiday, I would say Deep Breath is not too bad.

As with every post-regeneration story since Castrovalva, Dr. Who goes through a period of instability and erratic behaviour. This has become a cliche uniting both the classic series and the new series. It's a tiresome one, as Power of the Daleks and Robot established the character of their new Doctors by bringing them straight into the action of the story. Deep Breath is less a story introducing the new Dr. Who and more a story about how Clara comes to accept the change.

So what are we to make of the Capaldi Doctor? Time and the Rani told us little about what the Seventh Doctor would be like and likewise, Deep Breath only partially establishes the characterisation of the Capaldi Doctor. What is most notable is how unsurprising Capaldi's performance and character portrayal was. The new Doctor is everything we expected, still funny, but a little more serious, a bit grumpier and a little bit angsty. No doubt this will be refined and developed as we go through the season. I did struggle at times to hear some of Capaldi's lines clearly. I'm not sure if that was down to his Scottish accent or the typically poor BBC sound quality.

I don't think we really needed comments in the dialogue about the new Dr. Who being Scottish. Previous Doctors never had lines commenting on their Englishness; it was just taken for granted. When we finally get a black Doctor, that will be the way to play it; not to comment on his ethnicity but to just have it accepted by everyone.


One of the things Moffat had promised in interviews was no more flirting between Doctor and companion. There is an attempt to make good on this promise with Dr. Who declaring "I'm not your boyfriend." Yet oddly enough, despite a bit of flirting, there was never all that much sexual tension between the Smith Doctor and Clara. Now that Capaldi has replaced Smith, the sexual tension has actually gone up by 100% and this may makes things rather uncomfortable. Despite being an older man, Capaldi is an actor who is inevitably going to come across as a lot more red-blooded than the rather awkward Matt Smith. He is never going to be a cosy middle-aged eunuch like the Seventh Doctor or a fey and unworldly young man like the Davison Doctor. He has the potential to be as sexy as Tennant. With his being older, suddenly we have a very big problem with Susan, to borrow Phil Sandifer's expression.


I groaned when I heard we would get another story set in the Victorian era. Given the frequency of this setting, it seems there were aliens on every street corner in the late 1800s. This setting brings with it all the tiresome old Cool Victoriana tropes that have been done to death; steampunk, useless cockney coppers, private detectives, gawking passers by, grisly murders as a beggars as a colourful backdrop. Jack Graham on Shabogan Graffiti has some insightful comments on the politics of these tropes. They inevitably serve up a particular ideological reading of history. You might expect a Tory like me to admire the Victorian era, but I doubt that writers like Moffat who deliver all these Cool Victoriana tropes are deliberately setting out to write right-ing propoganda. Yet the presentation of the Victorian era in fiction has clear implications about class, race and sexual politics.

Was there any point to the Dinosaur in this story? It only served to provide a self-congratulatory note of "We did a better job than Invasion of the Dinosaurs." The Dinosaur was horribly sentimentalised by Dr. Who and the other characters. One should not be cruel to animals, but talking about it as though it was a sentient being panders is rather mawkish.


There is a definite darkness of tone to this story. It all feels very adult, with very little, other than the Dinosaur, thrown in for the kids. That can sometimes work, but I'm not sure that Doctor Who as a show can maintain that kind of darkness for long.


No doubt the appearance of Missy at the end will fuel a course of "Is it the Rani/ Romana/ a female Master?" but she will no doubt turn out to be a throwaway character like Kovarian. This is a sure sign that Moffat is up to his old tricks and about to foist on us a season arc that promises mystery but turns out to be hollow.


Posted by Matthew Celestine at 09:36