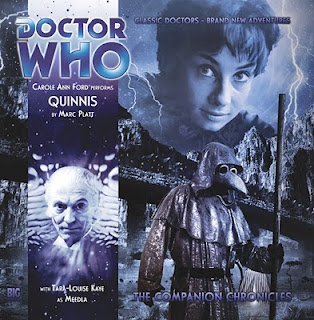 This is the first of the companion chronicles that I have heard. I found it quite easy to listen to. The narrated format probably makes for an easier listening experience than a lot of the Big Finish full-cast audio dramas.

You know what, Quinnis is the first Marc Platt story that I have ever actually enjoyed. While I am a big Seventh Doctor fan, I don't think much of Ghost Light. A lot of fans rave about Spare Parts, but that story did not impress me much at all. However, Quinnis worked fine for me. It was not a big heavy epic story, but a nice easy story with just a hint of darkness. It is also really interesting to get a pre-Unearthly Child story in which Susan and her grandfather are travelling alone.

Quinnis, located in the 'Fourth Universe' was mentioned in Edge of Destruction. Platt takes this throw-away line and builds a quite vivid world. Quinnis is wonderfully described, with a town built on a series of viaducts leading nowhere. The monstrous bird-like Shrazers feel quite nightmarish, like something from folklore. There is a real fairytale quality to this story that reflects both the First and Seventh Doctor era. The Shrazers operate as much on a level of metaphor as reality.

I am one of Susan's rare fans. A lot of fans really dislike the poor girl, but the fact that she is the Doctor's granddaughter makes her really special. For all the limitations of Carole Ann Ford's acting ability, she did give Susan a delightfully ethereal quality that suited her well. Here Carole Ann Ford does a great job of reprising her old role and also providing an adequate, if not brilliant impression of Hartnell's Doctor. Susan is characterized as desperately lonely for companionship and it is this that gets her into trouble. It is also this incident that leads the Doctor to believe that Susan needs a more structured and disciplined life (though that is a little at odds with his contempt for the school in An Unearthly Child).

Alongside Carole Ann Ford is her real-life daughter, Tara-Louise Kaye, who plays a girl that Susan befriends. This girl turns out to be more than she seems. Kaye plays this role very well, giving the character a really disturbing edge, while still allowing the listener the possibility of sympathizing with her.

While the Doctor is far from heroic in this story, he is a much more sympathetic than the sinister Machiavellian scoundrel we saw in An Unearthly Child. This is perhaps a little disappointing. On the other hand, it is lovely to hear him blustering his way out of trouble.

For me this was a lovely introduction to the Companion Chronicles and a fantastic Big Finish production.
Posted by Matthew Celestine at 08:09