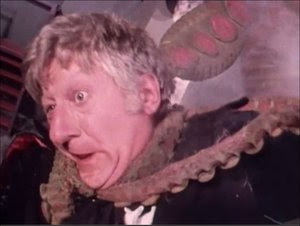 I think I first watched Spearhead from Space when I was eleven years old. The day I watched the recently re-released DVD, I started reading The Adventuress of Henrietta Street, by Lawrence Miles, the first chapter of which features prostitutes offering Tantric sex. The variety of depth and scope in Doctor Who is just breathtaking.

The Pertwee era is definitely one of my least favorite parts of the Doctor Who legacy. Nevertheless, I can't help sharing the sense of excitement and anticipation that Spearhead from Space exudes. Coming right after the slightly repetitive format of the Troughton era, Spearhead from Space feels new and fresh. This is heightened by the fact that it was shot on entirely on location using film. This gives it a delightfully cinematic look and feel. I do wish more stories from the Pertwee era had been made this way.

The full revelation of the new Doctor is delayed for the first two episodes. In the meantime, we are re-introduced to the already familiar Brigadier Lethbridge-Stewart. Nicholas Courtney takes to his new role as a regular wonderfully. He is entirely removed from the buffoon that he would become in later stories. He is joined by Cambridge scientist Liz Shaw. Her scepticism and reluctance makes a nice contrast with the Brigadier's familiarity with alien menaces. This makes for a kind of Mulder and Scully team that might have actually worked in the absence of the Doctor. The mistake of later writers would be to make the Brigadier into the Scully figure, which was absurd as weekly encounters with aliens ought to eradicate anybody's scepticism.

Caroline John's performance as Liz is quite excellent. She comes across as intelligent and sophisticated and her sarcastic wit is amusing. Unfortunately, her character was never given sufficient chance to develop. She was also unwisely dressed in miniskirts that seemed to detract from the seriousness of the character. Part of me rather wishes we had seen her being searched on arrival at UNIT HQ.

John Pertwee was never the strongest actor to play the role of the Doctor, yet he comes across as fairly likable in this story. Robert Holmes does seem to be writing more for Troughton and at times one can see Pertwee attempting to mimic Troughton's style. Pertwee was clearly not at ease in the role at this point, nevertheless he is enjoyable. He comes across like Mr. Toad in Wind in the Willows in the way he borrows a motorcar.

We get some great guest performances in this story. Hugh Burden is superb as the sinister Channing. John Woodnutt comes across as wonderfully oppressed as Hibbert and Derek Smee is convincingly terrified in the role of Ransome. Neil Wilson also gives an enjoyable performance as the not altogether pleasant poacher.

As regards the Nestenes and their Auton servants, I'm afraid I can't really believe in them. We are told that they have been colonising planets for a thousand million years. The Virgin New Adventures gave them a Lovecraftian twist by identifying the Nestene Consciousness as the offspring of the Great Old One Shub-Niggurath. Nevertheless, all we ever see of the Nestenes is them using various infiltration tactics involving plastic objects. They seem to be a race perfectly adapted to invading Twentieth Century Earth, but as far as we are aware, have no conceivable activity beyond that. I can imagine the Daleks burning planet after planet to cinders. I can imagine Rassilon battling giant vampire bats. I cannot, however, imagine the Nestenes doing anything other than using plastic to invade Twentieth Century Earth. It does seem to me that the Nestenes have something of a gimmicky quality to them that does not make for convincing science fiction.

While the Nestenes might not be altogether believable as an alien race and a little gimmicky, in this story they do have the capacity to terrify. The scenes of the Auton approaching the UNIT van and menacing Mrs Seely are genuinely scary. It is rather surprising that the shot of the blood on the smashed windscreen was allowed in. Personally, I feel that was a little too horrible.

The biggest failing is the plot. The various elements, the walking dummies, the attempted kidnap of the Doctor and the waxwork dummies don't quite hang together very well. The Nestene strategy does not make a huge amount of sense and there are numerous holes in the plot. The ending feels rushed, with the Doctor simply building a gadget to kill the Nestenes.

Many fans are uncomfortable with the Doctor's new role working with a military organisation. Philip Sandifer at TARDIS Eruditorum argues that the problem is not so much that the Doctor does end up working with UNIT, but that he actively seeks them out without exploring any other options. This might be explained by the fact that Lethbridge-Stewart immediately seeks out the Doctor after his regeneration. It is likely that the Doctor is influenced by the things he encounters after he regenerates, for instance, the Fifth Doctor being taken by the cricket gear in Castrovalva. I also think that there may be an unseen adventure that the Second Doctor had with the Brigadier prior to The Invasion.

Although Pertwee's gurning at the end is rather hilarious, the tentacles really do look quite impressive. Spearhead from Space is on the whole, a good start to the Pertwee and UNIT era.
Posted by Matthew Celestine at 07:19