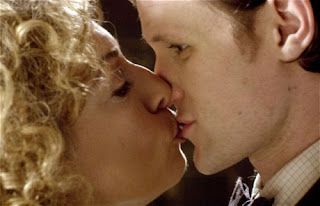 I can't remember ever wanting the Doctor to die before. On Saturday evening I found myself wishing that the Doctor would just die. There he was dying. I'm sure we have been there before. I began to wish that this would be for real. Moffat clearly wants to write a show about River Song. How about just killing off the Doctor and getting on with it? River can be the new Dr. Who; no need to change the name of the show. That way I wouldn't need to waste my time watching this program any more.

As with every other episode of the current season, there are people giving this positive reviews despite it's total lack of intelligent storytelling. There also seem to be a lot of people saying "I was enjoying this season until now," as though the faults in Moffat's writing and producership have somehow escaped them so far.

Giving a historical character like Richard Nixon about two minutes of screen time was bad, but Adolf Hitler gets even less. Just what was the point of writing a story set in the Third Reich in which Hitler has no relevance? What history lesson have children watching this learned?

It is not only Hitler and the Nazis that get sidelined in this story. We also get a time-travelling Justice Department who go completely unexplored and unexplained. No attempt is made to flesh out why they do what they do or the characters of those involved. Let's Kill Hitler is not about anything except Dr.Who and River Song. The writer does not care about Nazis or time travelling judges. Dr. Who is the most important person in the universe and River Song is apparently the most evil person ever because she kills him.

Moffat introduces a new character, Mels who went to school with Amy and Rory. This young woman turns out to be River Song after she regenerates. It's hard not to suspect that Moffat is making up all this background for River Song as he goes along. Alex Kingston does a wonderful job of portraying the newly regenerated Mels, the only worthy part of this episode. We learn that River is a weapon that exists only to kill the Doctor, but then strangely she has a change of heart and sacrifices her remaining regenerations to save him. This character simply has no believability. She completely lacks any personality or motivation. Moffat simply adds a new element to River any time the plot needs to go somewhere. It feels utterly shallow and false.

The Doctor does nothing of any interest whatsoever in this story. Matt Smith has at times shown himself to be pretty good as Dr. Who. Nevertheless, he is utterly unused and uninteresting here. Rory and Amy aren't much more interesting either. They are in the unusual position of having a daughter who is visibly older than they are and who turns out to have been one of their schoolmates. Just how are they supposed to react in that situation. It's quite obvious that poor Karen Gillen and Arthur Darvill have not got a clue how they should play this bizarre role. I'm certainly not sure as a viewer how I am supposed to identify with them.

It feels like this series gets worse with every new episode.
Posted by Matthew Celestine at 07:46