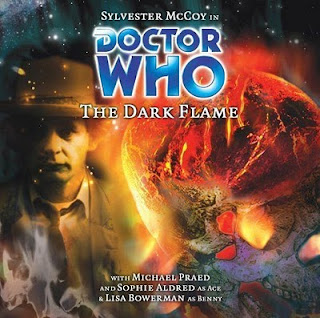 The Seventh Doctor, Ace and Bernice encounter a sinister cult and an eldritch entity.

This is the second of Big Finish's audios that are set within the New Adventures continuity. That they have not made any further audios with the NA TARDIS crew indicates that there can't be that many weirdos like me who view the Virgin New Adventures as a golden era of Doctor Who. I think it's a shame. Big Finish appear to want to concentrate on a period they have 'discovered' in between Survival and the new Adventures. Judging from Colditz, they wanted a kinder, gentler Ace than the one seen in the New Adventures. This reflects the fact that Big Finish is all about pleasing people who want good old fashioned Doctor Who rather than people who like the challenging, experimental approach of the Virgin range. Still, I am glad they appreciated us NAstalgics enough to give us two NA era audios.

Perhaps a little oddly, this story is not by one of the NA writers. Maybe they were all tired of this era and wanted to do other stuff. Like many of the New Adventure novels, you can see the influence of Lovecraft, with the presence of a sinister cult, worshipping a godlike extra-dimensional entity. The other NA-like offering from Big Finish, Shadow of the Scourge was much more creative in terms of plot and ideas than this. Unsurprisingly, Shadow of the Scourge was by Paul Cornell, one of the greatest of the NA writers.

Ace comes across as a good deal more aggressive than she was in Shadow of the Scourge, though as with that play, Sophie Aldred fails to capture the New Adventures version of the character. Lisa Bowerman is fun as Benny, though her constant joking does strain credibility. McCoy's performance is full of enthusiasm.

If you are a New Adventures enthusiast you will want to listen to this, if not, you can be assured that Big Finish have released better audio dramas than this.
Posted by Matthew Celestine at 09:10