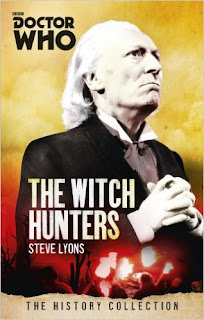 The Witch Hunters was one of the original line of BBC Past Doctor novels, but was recently released in a series of reprints. Unlike the majority of Doctor Who novels, it is a pure historical; the only Sci-Fi elements being those relating to the regular cast.

This novel is about the famous witch trials that occurred in Salem in late 17th century America. It is open about its inspiration, referencing Arthur Miller's Crucible several times. While Steve Lyons has clearly put in a lot of research, as a theology graduate, I winced at some of his mistakes about Puritan theology. The characters refer quite frequently to Purgatory. The people of Salem would most definitely have abhorred the 'Popish' doctrine of Purgatory. He also has Rebecca Nurse believing she is damned as a result of her excommunication. That is not how the Puritans understood excommunication. While Rebecca Nurse would hardly have been happy at the disgrace of excommunication, she would not have believed that the minister had the infallible power to consign her to hell. I also thought it was a bit odd that the Ian and Barbara had not attended church meetings in Salem until the outbreak of the witch trials. There is no way that they would have been able to absent themselves for months in a community in which non-attendance was punishable by law.

The Witch Hunters is very heavy on high emotional drama, perhaps a little too much so. It does feel like Lyons is trying too hard to get an emotional reaction. The scene with Dr. Who taking Rebecca Nurse to see the future and her own memorial reminded me a lot of Vincent and the Doctor, a similarly emotion-heavy story. This novel is unusual for a Lyons story in its lack of humour (The Final Sanction being another exception); he is possibly better at working with a more comic tone.

I'm one of Susan's few fans, so I liked the attention given to her in this novel. It made good use of her developing telepathic abilities, as seen in The Sensorites. I also very much appreciated the chance to see Susan interacting with other young people, which she did not get to do very much on screen. However, I am unsure that she would have been so ready to try to change history and in her feeble efforts, she does come across as a little bit daft.

The First Doctor in this novel is very reminiscent of the Seventh Doctor in the New Adventures. The idea of him preventing Rebecca Nurse from being pardoned and returning her to be executed is a bit grim. I very much liked the fact that we have the Doctor making a solo voyage in the TARDIS following the events of The Five Doctors. This creates a gap in continuity which allows such stories as the First Doctor's solo travels in the World Distributor annuals, his TV Comic adventures with John and Gillian and his contest with Fenric and subsequent travels with Zeleekah.

This is certainly not the best Doctor Who novel, but it is an interesting work from one of the finest writers to work in the expanded universe of Doctor Who.


Posted by Matthew Celestine at 03:09