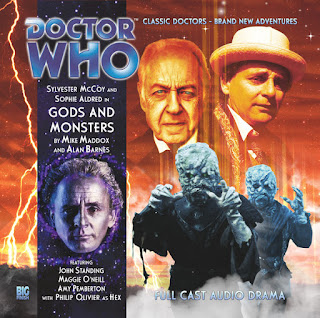 I'm not sure we really needed a sequel to The Curse of Fenric. The really interesting thing about The Curse of Fenric is that we were faced with the Doctor's greatest ever enemy, a character that we had never even heard of before that story. We were being given a glimpse of a strange unseen backstory to Doctor Who. It seems rather appropriate that after that episode, Fenric was never mentioned again, apart from the revelation that he was the Great Old One Hastur. Bringing him back makes this entity a lot less mysterious and therefore a lot less interesting.

I found it a bit difficult to appreciate this story, as it is the conclusion of a trilogy and draws heavily from the Ace and Hex range of Big Finish audios. Nevertheless, it was interesting and had some great drama. The audio was reasonably well paced and structured.

The Haemovores are definitely a problem. In Curse of Fenric, these were silent monsters and so lacked a lot of potential for translation to audio. In this audio, they are made to wail, moan and gurgle, which does not come across as nearly as terrifying as it ought to. They are a very ineffective menace here.

My biggest problem is the way that this story changes the nature of the Doctor's contest with Fenric. In Curse, this was a mythic battle between two gods. Here, the Doctor is reduced to just a helpless pawn of Fenric. Big Finish has little time for the Virgin New Adventures notion of the Doctor as a god-like elemental figure. It is hard not to feel that Big Finish is in a number of ways working to undo the legacy of the New Adventure era.

Posted by Matthew Celestine at 04:07