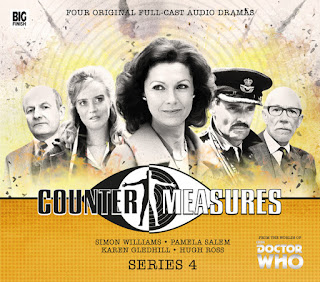 
I complained in a previous review about the lack of extraterrestrials in Counter-Measures. This is sort of remedied with the return of the Light from The Assassination Games, though I would have liked to have seen the sort of slimy seaweed-like aliens that you might expect in a series influenced by Quatermass. British Rockets Group make an appearance, however.

Unlike the previous series of Counter-Measures, the individual episodes are not proper stories, but blend into one big series arc. I felt this made for a somewhat less interesting ride. It also meant problems of pacing, as some of the episodes could not carry the arc forward as well as other parts.

There are a few nice moments in this series. I like the use of a monorail in the first episode. Monorails are very Sixties and evoke the spirit of all those Gerry Anderson shows and their spin-off comics. There is also a nice line from Gilmour about destroying the world from Hertfordshire. There is also a clever use of the audio medium, with Gilmour and Sir Toby being played with the wrong voices, without this being commented on until later in the story. Nevertheless, my feelings about this are the same as the previous series. Too much darkness and too little humour (as well as too few monsters). All the intrigue and betrayal becomes just a bit too much. What the Counter-Measures series has so badly needed is a few more light-hearted stories that simply enjoy the nostalgia of this era. A slightly lighter tone at times would really give the listeners a break.

Shockingly, it appears that Counter-Measures ends here. The series ends with Gilmour, Rachel and Alison all getting killed in a series of explosions while Sir Toby denies that the group ever existed. Does it really end like this? Quite possibly it is, given that there is no announcement of a new series. If this is the end of Counter-Measures, this is an horrible and lazy way to end the series. It would also contradict a number of Doctor Who novels, such as Millennial Rites, in which we learn Rachel Jensen became scientific adviser to the Cabinet.


Posted by Matthew Celestine at 02:52