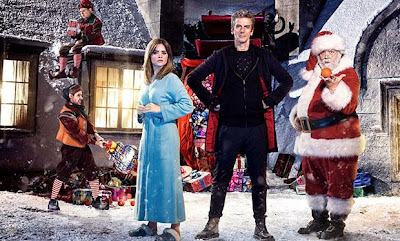 As I watched Last Christmas, I had the strange feeling that it was the first time since Runaway Bride that I had actually enjoyed a Christmas special. Then, someway through the episode, I realised why. Last Christmas is essentially a re-working of Field Trip, one of my favorite episodes of The X-Files.

In Field Trip, Agents Mulder and Scully investigate the mysterious death of a young couple and find themselves experiencing strangely unreal sequences of events. They later realise that they have been captured by a gigantic fungus colony that is digesting their bodies, while giving them dream-like fantasies. They free themselves, but then find that they are still imprisoned by the fungus creature and are only having a fantasy of escape. At the end, they are freed by their colleagues. 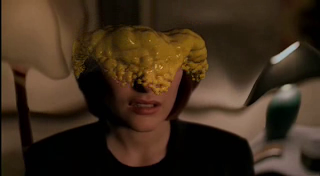 Despite the similarity of plot, what separates the two stories is the tone and atmosphere. The dream sequences of Last Christmas are, despite the presence of some horrific elements, gaudy sentimental fantasies, with the presence of Santa Claus and the idea of a perfect romantic Christmas day. In contrast, the dream sequences of Field Trip are realistic in tone, like standard X-Files episodes with somewhat offbeat plots; Mulder encountering the dead couple alive and then finding proof of alien life, Scully investigating Mulder's death and being congratulated on wrapping up the case. There is a sense of the mundane becoming oddly dreamlike in that episode. Where Last Christmas offers non-stop action and lots of running around, Field Trip is an unusually slow paced story, it takes its time and allows the strange dream-like atmosphere to build up.

The way in which the characters discover they are in a dream is different. In Last Christmas, the Doctor just tells them that they are experiencing dreams. In Field Trip, Mulder and Scully have to work this out for themselves. Mulder realises that he is in a dream when Scully accepts his proof of alien life without question, while Scully realises that she is dreaming when everybody uncritically accepts her rational explanation of Mulder's death. We also get in Field Trip more of a sense of just how horrifying the carnivorous dream-producing entity is. In the opening sequence, we see the young couple clinging to each other in their fantasy, before turning into skeletons, still wrapped in each other's helpless arms.

The resolution is also very different. With typical Christmas special sentimentality, the solution for the characters is to embrace the fantasy of the dream, hence the sleigh ride prior to their escape. In Field Trip, such an escape is impossible. You cannot will yourself to wake up from a dream. In the end, Mulder and Scully are helpless and have to be rescued by their FBI colleagues. It is perhaps not the strongest resolution to an X-Files episode, but it does fit with the more pessimistic tone of the show compared to Doctor Who.

I enjoyed this episode and feel it is one of the stronger Christmas specials the BBC Wales series has offered. However, the thematic similarities to Field Trip show it to be lacking in elegance of execution.


Posted by Matthew Celestine at 13:12