Doctor Who and The X-Files 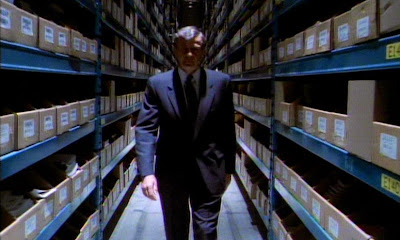 Recently I have been watching The X-Files a lot. Often I tell myself I will watch a Doctor Who DVD, then I end up putting on The X-Files. I actually feel I have a stronger sense of nostalgia for The X-Files. Apart from the 1993 repeats, I never had the experience of watching Doctor Who on television. My experience of that show was mediated through novelisations and video releases. On the other hand, I started wathing The X-Files in its second season in 1995 when I was fourteen, a key period in my life.

A while ago, Phil Sandifer wrote a post on The X-Files in the context of Doctor Who. I'm going to look at this from a slightly different angle.

It is often commented that Doctor Who is about the juxtaposition of the mundane and the fantastic. A junkyard contains a time traveller, a police box is a spaceship, a quarry is an alien planet and monsters are made of bubble wrap and sink plungers.

In a similar way, The X-Files also deals with the fantastic enmeshed with the mundane. This is seen in the genre; the two protagonists are FBI agents who investigate crime, following generally normal police procedure. They follow up leads, interrogate suspects and analyse forensic evidence. The X-Files is as much a crime drama as it is a science fiction show.

The fantastic entering the mundane is obvious in the 'Monster of the week' episodes; the child that is posessed by a demon, the separated identical twins who murder their parents and the perfet neighbour hood in which residents are killed when they put out tastless garden furniture. Domestic horror is nothing new. Yet the same principle of the mundane-fantastic finds its way into the conspiracy-orientated 'Myth Arc' episodes in a much more creative and striking manner.

I find it fascinating how so much of the big conpiracy episodes take place in mundane settings. Terrible government secrets are hidden in drab, functional buildings. Alien autopsies are carried out on trains and alien technology is transported on lorries. The alien and exotic in The X-Files is mediated through bureaucracy.

The X-Files might have better special effects than Doctor Who, but it had similar budget constraints. Hence, while Doctor Who had its quarries, The X-Files had endless scenes in car parks. There is the sense of a childrens' game of make-believe where you have to use your imagination to see the magnificence of the alien myth arc. Like Doctor Who, The X-Files seems to harvest the power of the imagination in glimpsing the fantastic. Just as children can see a quarry and imagine an alien world, the young viewer of The X-Files can imagine nefarious deeds taking place in a car park.

When I was fifteen and a fanatical viewr of The X-Files, I would imagine that every train might be carrying an alien corpse, that every warehouse might conceal a crashed flying saucer and that every government building might contain records of terrible experiments.

Posted by Matthew Celestine at 05:48