The Blue Angel, by Paul Magrs and Jeremy Hoad 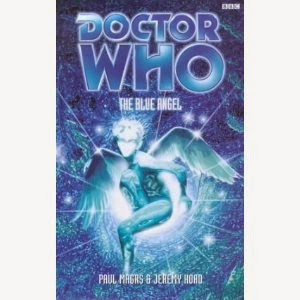 I have been dreading writing a review of this novel. It's a really sprawling mess of a book.

The Blue Angel gives us a number of sub-plots, without bringing them altogether in a way that actually makes sense. We get a starship crew that are essentially a Star Trek parody, a group of old ladies who get whisked away to another world and are attacked by giant owls and a complex space opera about the various races living in a pocket universe. We also get a strange, dream-like sub-plot about the Doctor living in a Georgina house with Fitz and Conpassion and going for tea with a friend called Sally. It's never explained how this subplot relates to the rest of the book. In the centre of it all, we get Paul Magrs best known creation, Iris Wildthyme. Furthermore, the novel has no resolution. At the book's climax, Iris whisks the Doctor away before he can bring the story to the sort of conclusion that we would expect in a Doctor Who novel. This is a really clever idea, but it does leave one feeling a bit unbsatisfied. However much we might admire literary experimentation, one does tend to like some kind of resolution at the end of a novel as a reward for reading, even if it is a Virgin novel ending, with nearly everybody dead and Ace and Bennie absolutely furious with the Doctor.

Magrs and Hoad decentralize the Doctor from the narrative. He runs around trying to solver every problem that arises, but ends up looking useless and incompetent. Phil Sandifer suggested a while ago that in this, Magrs and Hoad were reacting to the Virgin books and the 'Time's Champion' idea. However, the Virgin books occasionally pulled off this trick, with the Doctor's plans frequently falling apart. The Blue Angel is basically an Iris Wildthyme novel with the Doctor making an appearance. This incarnation of Iris, resembling Jane Fonda's Barbarella, is undoubtedly the strongest version of the character. This Iris is not a dithering old lady, but a powerful and dangerous figure.

The Blue Angel is of course the second appearance of Copassion, after her debut in Interference. I like Compassion, but I don't think Magrs and Hoad handle her all that well. She is harsh and cold, which sets her apart from other companions, but in this novel her coldness ends up coming across as annoying. Fans have often compared Compassion to Seven-of-Nine in Star Trek: Voyager, yet that program utilised the ex-Borg very well. For all Seven's coldness, the viewer was able to like her and warm to her. Magrs and Hoad do nothing to make us warm to Compassion and everything to make us resent her presence. That the novel fails to follow the lead of Voyager is ironic, given the Star Trek parody going on here.

There is plenty of humour here, but it is not the kind of laugh-out-loud humour that Magrs achieves in Mad Dogs and Englishmen. I didn't find the Star Trek parody all that funny; Bang-Bang-a-Boom does a better job of that. I did like the attept at world-building, with all the various distinctive alien races. It is just unforunate that with all the various sub-plots and ideas in this book, nothing really gets enough attention. I'm afraid to say that on the whole, I found this novel rather disappointing.

Posted by Matthew Celestine at 02:42