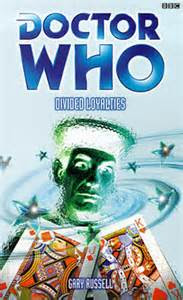 It's often little details that annoy me most about stories. I found myself feeling a certain annoyance at Gary Russell's drop of a hat revelation in this novel that Tegan's family are Jewish. Not that it wouldn't be great to find out a companion is Jewish, but this does not fit anything we know about Tegan.

So we have an Australian young woman who is from Brisbane, but does not have a Brisbane accent (apparently). A woman who has a Slavonic surname and an unusual Celtic first name, with Serbian grandparents. A woman who speaks the Aborigine's language. A woman who is apparently Jewish.

It's not impossible that Tegan might be Jewish. There are Jews who have the surname Frazer, the name of the other side of her family. There was a very old Jewish community in Serbia. There are still some Jews there today, but not very many. The Jewish population in Serbia was decimated by the Holocaust. Most of those who survived emigrated to Israel. Tegan's grandfather, however, still lives in what was then Yugoslavia. That does not help Russell's case for a Jewish Tegan.

Paul Cornell's novel Goth Opera had a scene in which our favorite Austalian air hostess chases off a vampire with a Gideon Bible in hand. We get the impression she would have been just as comfortable brandishing a crucifix. The scene very much suggests a Serbian Orthodox background. That I am discussing this shows I am just as much a continuity obsessive as Gary Russell, but that is neither here nor there. The disturbing impression I get is that Russell's logic was on the lines of "Lots of Jews have Eastern European names. Tegan's family is from Eastern Europe, so they might be Jewish," thus ignoring the impact of the Holocaust and the fact that there are not that many Jews left in many parts of Eastern Europe. It does not suggest much broader cultural awareness. Maybe events in former Yugoslavia made the thought of a Serbian Orthodox background rather unappealing for Russell. Being Serbian was not terribly glamorous in the nineties, with all that went on in Sarajevo and Kosovo.


So having dealt with the fascinating question of Tegan's religious background, we move to the more mundane question of this novel. Is it actually any good? This novel would probably make it on to a top ten list of hated Doctor Who novels. It has been savaged by fans and reviled as an example of the worst excesses of continuity fetishism. Some of this criticism is a bit harsh, but I did find the book difficult to enjoy. It was a very plodding story, with too many dreamscapes and the non-regular characters were largely uninteresting.

There were some things in the story that I enjoyed. Gary Russell has a great affection for the Fifth Doctor era and this very much came out in the portrayal of the regular characters, with all their bickering and conflicts. He does a great job of fleshing out the individual characters of Tegan, Nyssa and Adric (aside from the bit about Tegan supposedly being Jewish). Unlike a lot of readers, I rather enjoyed the high school style depiction of the Doctor and chums at school. I have always liked the idea of Dr. Who and other renegade Time Lords being at school together. I also enjoyed the exploration of Doctor Who cosmology and the insights into the Great Old Ones.

There is the question of whether it is really appropriate to write a spin-off novel featuring the Celestial Toymaker given that he is such a racist caricature. Phil Sandifer dismissed The Celestial Toymaker as racist garbage and seemed to suggest that the recycling of the character in spin-off media was a really bad idea. Gary Russell seems to try to remedy this by pointing out that the Toymaker is Caucasian, despite his oriental dress. I'm not altogether sure in my own mind. The Celestial Toymaker is a very significant figure in the Doctor Who mythos in that he is the first super-powerful adversaries of the Doctor, after the Animus. He is a mysterious and disturbing figure. While it might be politicall dubious to dress him up like a Chines Mandarin, it does create a striking and memorable visual image.


Divided Loyalties on the whole a disappointing novel. Terrance Dicks offered lots of continuity references to stir the hearts of fans. Yet he wrote novels that were tightly plotted and often quite gripping. Divided Loyalties is just not a very interesting story.

Posted by Matthew Celestine at 05:57