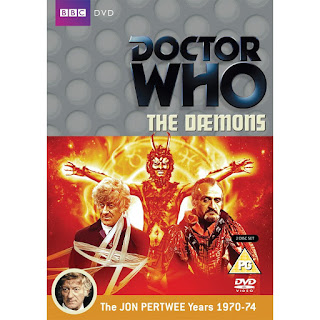 I first watched The Daemons in when it was repeated on the BBC in 1992. I was eleven years old at the time. I remember my parents being a little concerned about whether it was morally wholesome, with its depictions of Satanism. I remember sharing their concern. Even though I was keen on Doctor Who at that time, I don't remember enjoying it all that much.

The Daemons has a reputation of being a classic, a pinnacle of Seventies Doctor Who. While the story benefits from its beautiful location filming, I really don't see what is so amazing about it. Phil Sandifer has claimed that the New Series has far superior writing and direction than anything in the Classic Series. I don't feel able to dispute the point; I haven't taken a course in media studies and I don't watch television. I don't even own a television. I have absolutely no idea what makes good television. But I think it is fair to say that a lot of classic Doctor Who has been vastly overrated by fans and when held up to scrutiny often shows glaring failings.


To a large extent, The Daemons is Quatermass and the Pit relocated to an English village. I vastly prefer the Quatermass story to this. That story felt eerie and disturbing. The Daemons fails completely to generate the menacing atmosphere of Quatermass and the Pit. The Daemons feels far too cosy. I also prefer the choice of the Quatermass story to give the ancient aliens an insectoid appearance. Making Azal look exactly like a traditional image of Satan is the kind of crass literalism that treats the viewer like an idiot. It's the same crass literalism that requires the Kaleds to look like Nazis and wear Iron Crosses in Genesis of the Daleks.

In Quatermass and the Pit, the ancient aliens are long dead. They are kept at a distance from the viewer, which adds to the sense of eerie mystery and avoids the difficulty of portraying terrifying cosmic evil on the screen. In contrast, in The Daemons, the devil makes a personal appearance and what a letdown he is! Satan turns out to be just another alien. Dr. Who facing the devil ought to be a glorious moment, but we've seen alien races before, but this one is defeated without any effort. There is something utterly soul crushing about the lazy and stupid resolution to this story that matches even the banality of reducing Satan to just another lame monster.


As mentioned above, one of the great strengths of the story is its delightful use of an English village as a location. Unfortunately, the script gives us an appalling set of stereotyped yokels. There are no real a characters among them. They are just a mob. They can be inspired to burn witches simply by the quotation of Scripture. Seriously, how often did witches get burned in Twentieth Century English villages?

Miss Hawthorne is the only real character, other than the regulars. Given her obsession with the Devil and her cosy relationship with the previous vicar, one might have expected her to be an eccentric and over-zealous Christian rather than a witch. She certainly comes across more like a middle-class High Anglican spinster. I suppose having a character with a real Christian faith would raise too many awkward questions about religion.


Although this serial is uniquely a five-part story, it has all the padding of a six-parter. The story is basically gearing up for the big confrontation at the end, but it takes a very long time to get there, with all the nonsense about the heat barrier and the repeated attempts to kill Dr Who. The story feels just too elongated to be really enjoyable.


I don't care much for Jon Pertwee's version of Dr Who, but in this story he is especially annoying. He is so rude, arrogant and patronizing! I want to scream when he tells Jo off for being rude about the Brigadier! And then when Jo saves his life, he does not even bother to thank her. Fans endlessly quote the Brigadier's line about five rounds rapid, but this rather obscures the fact that for most of The Daemons, the character is left standing around.

We do get a lovely performance from Delgado. He never let us down. That said, as a mastermind manipulator, he falls rather short in this. He gathers together the locals to persuade them to join his side. How does he do this? He accuses them of various misdeeds, than insults them and then starts telling them to obey him or he will destroy them. Don't bother running for the local council, Master.


Perhaps I am a bit harsh in my judgement of this story, but it does seem to get a lot of undeserved praise from fans. I do think the production team deserve praise for their ability to come up with Earthbound stories like this one, without ending up with variations on mad scientists and alien invasions. This may not be the most original story, but it does make creative use of the Doctor's exile on Earth.

Posted by Matthew Celestine at 08:02