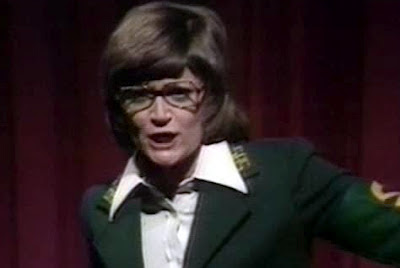 I really like Robot. It's actually my favorite story of Season 12 and my favorite pre-Graham Williams Tom Baker story. It has such an easygoing sense of fun that I find impossible not to adore.

One of the irritating and cliched traditions that this show has been saddled with is that the Doctor is unstable immediately after his regeneration. Hence, in new Doctor stories, we get several episodes (or twenty-five minutes in the BBC Wales series) where the Doctor does absolutely nothing. Castrovalva is among the most irritating of these offenders. Robot stands out considerably from this tendency, contrasting with Spearhead from Space before it. The newly regenerated Fourth Doctor is certainly chaotic and eccentric in his behaviour, but it does not stop him jumping into the action right away and proving himself a skillful detective.

It is often said that Robot could easily have been a Pertwee story. On the surface of it, this seems the case. We have the old UNIT team, crazy scientists and crazier science. Yet there is a really crucial difference. The difference is easily missed and it's the presence of an interesting and entertaining villain, Miss Winters. Try as I can, I just can't imagine Miss Winters fitting into a Jon Pertwee story. With the suave presence of Delgado's Master, it's easy not to notice the lack of memorable villains in the Petwee era. The Tom Baker era, in contrast, was rich in brilliant bad guys and girls.

Miss Winters is the very model of the Tom Baker villain. She is self-important and megalomaniac, but most important of all, she is utterly humourless in such a way that she actually becomes rather funny. This is brought out by her contrast with the clownish and shambolic Baker Doctor. The self-important Pertwee Doctor could never have made that contrast with Miss Winters.

Hilda Winters is of course a completely over the top character, with all subtexts blazing (some lucky guy was going to help her repopulate the Earth Day of the Triffids-style). She is adorable for it and in the end she is a figure of fun. I particularly like the fact that she survives the story, no doubt to receive an extended stay as a guest of Her Majesty. The Sarah Jane audio Mirror, Signal Maneuver reveals that she spent fifteen years in jail after Robot. Mirror, Signal, Maneuver unfortunately misunderstands her character. I really don't buy the idea of Miss Winters masterminding a further criminal plot years later. Her incompetence and silliness adds to her fun. I rather prefer to imagine her leaving prison to be some harmless crank who writes insane articles in Paranormal magazines, or something like that.


While nodding to the previous era, Robot certainly lays the groundwork for the new Hinchliffe era with its borrowing from classic films, in this case King Kong. Yet the light and easygoing nature of this story makes it stand out from the Hinchcliffe standard. There is so much sunshine in this serial. It very much has an holiday feel. That is why I love it.