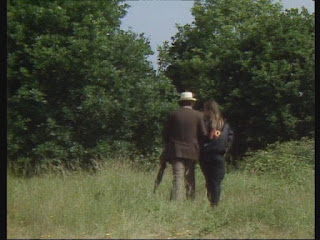 "I thought you had died. Or gone to Birmingham."

It is often said that Survival laid the groundwork for the new series with it's setting in a London council estate. As I dislike the new series, this does not exactly fill me with enthusiasm. I'd rather watch this than Rose any day. Neither story gets real life quite right. Survival has the incongruity of the very middle-class seeming Ace, while Rose has the titular character dressed in casual clothes while working in a department store.

Survival is of course the last televised Doctor Who story of the 1963-1989 series. It is not a big dramatic ending to the series, but this is probably not a bad thing. The new series has been ravaged by a philosophy that says that every season finale has to be bigger than the last one, with more explosions, more incidents of the Doctor saving the universe, more tearful companions and more dramatic Murray-Gold music. In contrast, the TRVE Doctor Who series has a quiet, dignified end, with that beautiful voiceover. That hastily written piece of dialogue just sums up exactly what the show is about.

An Unearthly Child had two ordinary people being kidnapped and taken from the mundane world of London to a savage and primitive environment where they had to use their wits to survive. It is therefore highly appropriate that the last story of the series should share those elements. The last Doctor Who story takes us to where we began. Yet crucially the difference is that the Doctor's companion in this story has no desire to go back to London and instead embraces the life of travel in the TARDIS.

One of the things I love about the Seventh Doctor era is stories like this that have a strong element of magic or fantasy. There is not attempt to come up with a silly scientific explanation of how the Cheetahs can travel, how violence can destroy a planet, or how the people of the mysterious planet turned into Cheetahs. People talk about magic in the Moffat era, but this is not really magic at all but nonsense science that does anything the writers want it to do, along with a few visual references to Mary Poppins and Disney. What we get in Survival is real magic.

The metaphorical overtones of this story are fascinating to explore. The references to blood and the moon and female sisterhood all point towards themes of menstruation and female sexuality. There is a very subtle sexual subtext to Ace's transformation into a Cheetah girl. Survival is thus similar to Kinda in having a character permanently effected by a change. This is not like Star Trek, where everything is resolved in the end. It is perhaps a little disappointing that the New Adventures make so few references to Ace's transformation (it is mentioned in Witch Mark and Blood Heat). However, it is possible that the Ace's increasing aggression and combat prowess are a result of the change.

On the whole I would rather that this story did not include the Master. This is possibly Anthony Ainley's best performance and there is none of the sill plots that you get in other Master stories, but I still don't think he adds any value to the material. It seems almost as though JNT and Cartmel said "We've done a Dalek story, a Cyberman story, now let's do a Master story!" I don't think the Master fits into the world of the darker Seventh Doctor.

The Cheetah planet is beautifully realised. It is at once both scenic and terrifying. The Cheetah costumes bear a good deal of similarity to some of the creatures in the BBC Chronicles of Narnia that was being made at the same time. I can assure anybody who has not seen those programs that the Cheetah costumes really are the superior.

There are some nice surreal moments, such as the cameo from Hale and Pace and the morose girl collecting money. For such a small part, that girl leaves quite an unsettling impression.

Sergeant Patterson is a fun character. He is very well realised and there is a great irony in his being unable to live up to his own idealism. It's interesting to watch a character like him, because they have become in such short supply that they tend to be regarded as heroes. I suspect nowadays a volunteer like him would be in line for a medal. Helping out in the community is what the government likes, even though hardly anybody has the time to do it.

One thing that bothers me is all the deaths in this story, made more shocking by the fact that they are young people. This does not sit easily with its generally light tone. The story has other faults, most obviously the clumsiness of its climax. However, on the whole it is a worthy ending for the 1963-1989 series.
Posted by Matthew Celestine at 04:20