The Second Doctor, Jamie and Zoe give the newly formed UNIT a helping hand dealing with the Cybermen.

Throughout the Patrick Troughton era, there are hints of what we would get in Season 7 under John Pertwee. Under Troughton, we see more monsters, more scientists, more alien invasions and more near future and contemporary settings. However, more than any of the other Troughton stories, The Invasion stands out as a prototype for the earthbound Pertwee stories. We have the near future setting, the return of Lethbridge-Stewart, the first appearance of UNIT, Benton, an alien menace, scientists, gadgetry, a dastardly tycoon and military leaders turning out to be helping the bad guys. All the vital ingredients of the earthbound Pertwee stories are present. The temptation is to evaluate it purely in terms of what the show would become rather than as a story in itself.

Two episodes of this story have been lost from the BBC archives. Thankfully, these have been reconstructed by animation for the DVD release. These animations are really quite effective, though they slip up by putting Zoe in the wrong outfit. The Invasion is a little long, but it is not too padded, compared to other Sixties and Seventies stories. The story has something of a difficulty with scale. We see a Cyberman invasion that consists of just a few Cybermen in London who do not do very much. There is a UNIT military action that rescues a significant character that takes place offscreen. We have a space battle that is created using a bit of stock footage. Still, the story does the best with what it has. Despite the limitations of what we are shown, somehow The Invasion manages to capture an epic, movie feel.

Troughton is in top form in this story, dominating every scene. One interesting thing to note is how well he gets on with the Brigadier. There is not a hint of the tension between the Third Doctor and Lethbridge-Stewart. It seems that the humble, self-effacing (but ultimately rather anarchic) Second Doctor got on much better with the Brigadier than the arrogant, haughty, but still more conservative Third Doctor. Wendy Padbury is also marvellous as Zoe. I like the fact that as well as doing her usual clever clogs stuff, she gets to dress up in fashionable clothes and act girly. It makes something of a change for the character. This is helped along by pseudocompanion, Isobel Watkins. I love her trendy cocknified received pronunciation. It is a shame she did not become a regular, because she gets on so well with Zoe and Jamie. In fact for a few minutes, the show seems to morph into Scooby Doo with the Brigadier talking about 'those crazy kids.' Jamie, Zoe and Isobel bear a striking resemblance to Shaggy, Velma and Daphne. All we are missing is Fred and that dog! Perhaps if Zoe had been introduced to the TARDIS when Ben and Polly were around the comparison would be more apt, though what this would make the Doctor does not bear thinking about too much!

UNIT in this story seem to have pretty impressive resources at their disposal and are able to carry out effective covert operations. They are a far cry from the Dad's Army we would see in the later Pertwee years. It might be nice to see more of Benton in this story, but their are too many other prominent non-regulars for John Levene to really get the chance to shine.

Kevin Stoney is incredible as the villainous Tobias Vaughan. Although he at times rages like every other Dr. Who megalomaniac, a good deal of the time he maintains a calm demeanour. Particularly impressive is his amusement at Zoe's destruction of his computer. Stoney also shows a great chemistry with Troughton in the scenes they have together. It has been asked why a genius like Vaughan would put so much trust in the hilariously incompetent Packer. Presumably, Packer's skills had never before been sufficently tested. 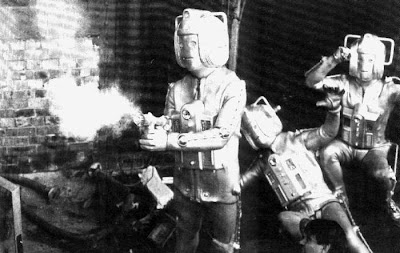 The Cyberman are a bit of a let down in this story. They act like zombies, showing no real intelligence. They seem to take their orders from a computer. Their metal faces looking strangely happy. Their vulnerability of the week is to artificially induced fear.

I think it is clear that this story is not mean to be set in the Sixties. The computer technology is more advanced and there seems to be peace with Russia. The story is specifically stated by the Brigadier to have taken place four years after Web of Fear which was set in 1975, according to Professor Travers. This is clear evidence that the UNIT stories have an 80s rather than a 70s setting.
Posted by Matthew Celestine at 02:48