Destiny of the Daleks

This is a story much attacked by fans. It has some faults, but it is still a reasonably good series. 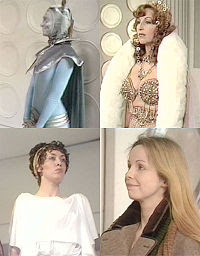 The story begins with Romana's regeneration. A lot of people dislike this scene, but it is funny to see the different possible incaarnations of the new Romana. If Romana's regeneration has not been brought on by a crisis, there seems no reason why she should not be able to select her new form. The costume selected by the new Romana is an excellent choice; a feminised version of trhe Fourth Doctor's garb, thus preparing us for a far more 'doctorish Time Lady.

The Daleks come across as pretty sinister in this story; a key test of a Dalek story's success. I am not sure whether this is helped or hindered by Romana's bursting into tears as she is interrogated. I have to say I found her blubbing hilarious. It seems like a throwback to her performance as the rather delicate Princess Astra. Despite this slip, for the rest of the story she is plucky and resourceful.

The return of Davros was an unfortunate development. His supposed 'death' at the end of Genesis of the Daleks was poignant and brining him back only meant he overshadowed the Daleks. But as he is a great character, it probably made sense at the time. Unfortunately, David Gooderson's performance does not measure up to Michael Wisher's, though he is not helped by a lack of great lines.

Tom Baker's performance is excellent. I particularly like the ruthlessness the Fourth Doctor displays, threatening Davros with a bomb and delaying freeing Davros until after two human slaves have been killed. We would never have seen the Third Doctor behave like this. The 'paper, stone, scissors' bit was a nice touch, if a bit perplexing.

The studio sets are reasonable and although a little wobbly looking at least have ceilings. The human slaves are completely lacking in character, but they at least wear interesting costumes.

Lastly, we can never forget those spangly disco babes, the Movellans! They are so badass! Just a shame they are so easily defeated.

I am a bit uncomfortable with the suggestion of the Daleks as 'robots.' They are not logical computers, they are beings filled with hate and anger.
Posted by Matthew Celestine at 11:25