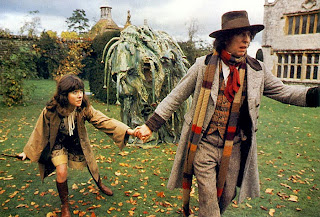 I am one of the few Doctor Who fans who is not keen on the Philip Hinchcliffe era. To be honest, given that horror is not everybody's cup of tea, I am surprised there are not more of us. I really struggle with the Hinchcliffe/ Holmes delight in gruesome painful deaths. They really pushed the show too far in a violent direction. Philip Sandifer, who often says things I agree with, ends up being a very uncritical defender of this period of the show. Yet when it comes to Seeds of Doom, he admits that the critics of Hinchcliffe have a point here. He points out that in this story, the producer cannot plead that the horror is fantasy and not realistic violence, with Dr. Who brandishing a gun, beating somebody up so badly he ends up in hospital and instructing a mercenary to make a Molotov cocktail. This is Doctor Who doing a big dumb action thriller. It does feel quite right, with Dr. Who at the beck and call of government agencies, investigating clues like a detective and the final resolution coming from an air strike.

Yet for all that I detest the excessive of violence of this story, I still can't bring myself to dislike it. I certainly enjoy a lot more than anything in the season that follows it. On the most basic level, it's got a big tentacled vegetable monster in it. I like man-eating plants and I like big tentacled monsters. The concept of an alien monster being dug up out of the Antarctic ice and menacing an isolated base (yeah, The Thing) always works. The direction and effects are superb, as you would expect with Douglas Camfield at the helm. We also get memorable characters like Harrison Chase, Scorby and Amelia Ducat. Although it is a six-part story, it does not feel too long or padded. It maintains a much better sense of pace than Genesis of the Daleks or Talons of Weng-Chiang. So I just can't dislike this. Seeds of Doom is a guilty pleasure of a Doctor Who story. 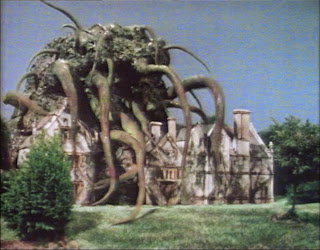 Posted by Matthew Celestine at 05:46