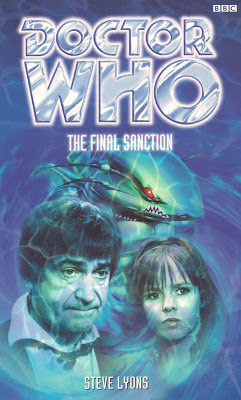 The Final Sanction is a really bleak, depressing war story. I did enjoy it though. Part of my enjoyment was down to the fact that the Selachians are such a great Doctor Who monster race and part of it was down to the really well constructed plot. This has a much cleanly and efficiently delivered story than Lyons' previous Past Doctor novel, The Murder Game. There was also a lot of NAstalgia involved in my enjoyment too. It is clear reading this that Steve Lyons is very much a writer in the mould of the Virgin New Adventures, with all their harshness. While there is a definite feeling that one has read this before, it still feels good. Like the best of the Virgin novels, it makes effective use of Doctor Who continuity, with a humanity scarred by the events of the Dalek invasion.

This is a novel all about war; about the complex morality of war, about terrible atrocities and about the war criminals who command unspeakable acts. In The Final Sanction, Jamie gets involved in the fighting directly, Zoe is captured and faces torture and deprivation in a Selachian prison camp, while the Second Doctor meets face to face with Wayne Redfern, who will be infamously remembered as the man who ordered the destruction of the Selachian's planet along with the thousands of innocent human prisoners held there. This TARDIS team feel a oddly suited to this role, being more generally suited to fun romps. However, they are written well and are not as badly served as they are in The Indestructible Man.

The Selachians are a great monster race; they're aquatic nature sets them apart from other aliens and their memorable visual image is impressive to imagine. They are fleshed out a little here and we see something of a different side to them. Their is a beautiful moment where a Selachian tells Jamie his name and it triggers images in his mind of another world, a beautiful and mysterious aquatic world. Yet they are as militaristic as ever, which does make them a little diffcult to sympathize with despite Lyons' efforts.

The war criminal, Wayne Redfern is perhaps a slightly cliched character, being a bellicose, gung-ho American with a Southern drawl. However, Lyons does give him enough complexity to make him interesting. I also loved the poignant ending the book leaves us with. The Doctor takes Jamie and Zoe back to the aftermath of the Dalek occupation, where we see a younger Redfern. The Doctor asks Zoe if she could kill the young Redfern and thus prevent so many future deaths. She replies that it would be logical, but she could never do it. In the next scene, we see Redfern saving the life of a young girl trapped under rubble. This is a beautiful way of showing the complexities of history and time travel.

One continuity complaint that I had was that the Doctor showed an awfully detailed knowledge of future human history. He had not previously shown such knowledge during the Second Doctor era. It is only in the Third Doctor era that the Doctor seems to show any detailed knowledge about future human history. I found it interesting that the Selachians regard the Doctor as a habitual enemy who has thwarted them many times. Do they mean only The Murder Game and the The Selachian Gambit (not published at the time of this novel!)? Did the Second Doctor have a further encounter with the Selachians with Victoria? Had the First Doctor tangled with them? Or did the Selachians recordss include defeats inflicted by a future Second Doctor from the Season 6B era? These questions really do fascinate me.

This book defintely reinforced my feeling that Steve Lyons is among my favorite Doctor Who authors. It is a shame that he is not better regarded for his output among fans.