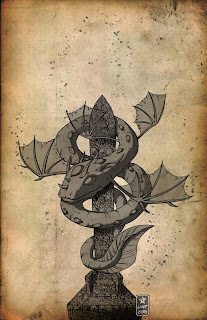 I asked Sylvant to draw an Yssgaroth for me. I had not seen many pictures of these beings, so I really wanted to see a decent fanart of one.

The Yssgaroth appeared in the New Adventure novel The Pit, though they seem to be related to the vampires in State of Decay. They are creatures from another universe. Before the Gallifreyans became Time Lords, they experimented with black holes and unwittingly allowed the Yssgaroth to enter the universe. These terrible beings fought a war against the Gallifreyans that was so long it became known as the 'Eternal War.'

Though they were defeated, some of their vampire offspring survived and there are also sinister cults that worship the Yssgaroth.

Posted by Matthew Celestine at 11:12