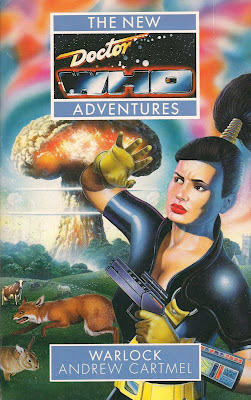 I really liked Andrew Cartmel's first New Adventure, Cat's Cradle: Warhead. There were a number of elements that made it great, the mysterious grim and foreboding Doctor, the non-linear plot, the peculiarly sparse dialogue and the surreal sense of a near future setting. Sadly, Warlock lacks all these elements that made Warhead so delightful.

Warlock has some great prose at times (and in a few places, some really bad prose) and some wonderful moments, such as the drug dealers using their drug to sound out who is an undercover cop and the way the gangster is destroyed by body language. However, it is seriously let down by a rambling and meandering plot that failed to engage with me. Cartmel also does an appalling job of trying to address the issue of vivisection, making out animal experimenters to be fiends who kidnap pets (animals for experimentation are specifically bred for that purpose) and enjoy torturing them for fun.

The Doctor does very little in this story. That is not necessarily a bad thing. Doctor-lite stories can be really effective. Birthright for instance has the Doctor only appearing a few times, yet the entire novel is filled with the sense of the Doctor's unseen presence. Warlock lacks that sense of the Doctor's presence or importance. He seems entirely incidental to the plot. The regular characters do very little as well. Cartmel puts the focus on his own characters, who are the most part, rather uninteresting and difficult to like. Perhaps it was down to the change in style, but even given several years maturity, Justine felt like an entirely different character to the person we saw in Warhead.

Being such a massive fan of the New Adventures and Warhead in particular, I expected a good deal more from this novel.


Posted by Matthew Celestine at 02:29