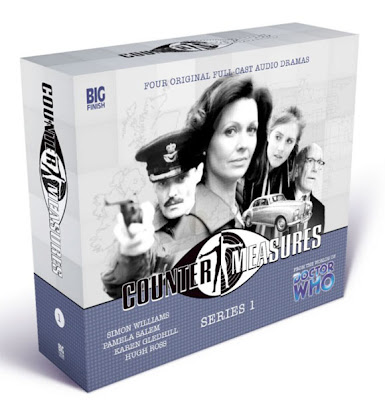 My copy of the unlikely Big Finish audio spin-off , Counter-Measures arrived this week. I had been awaiting this with great anticipation all year. I pre-ordered it on Amazon, but they took a while to get hold of it after Big Finish released it.

In this Sixties science fiction adventure, Pamela Salem, Simon Williams and Karen Gledhill return to their roles as Rachel Jensen, Group Captain 'Chunky' Gilmore and Allison Williams from Remembrance of the Daleks.

Not only is Remembrance of the Daleks my favorite Doctor Who story, but Pamela Salem is my favorite guest actress in the show. Rachel Jensen was sexy in a really elegant and mature way, something unusual in modern television.

Judging by the artwork, I suspect that this series takes an awful lot of influence from the cranky Sixties spy show, The Man From UNCLE.

Expect a review in good time.

Posted by Matthew Celestine at 11:12