"Doctor Who is required."

There you go. It's there in the script. In the canon. He really is called Dr. Who. You would think all those silly fans who insist he's called 'The Doctor' would just shut up. That line is one of a number of reasons for loving this story.

The War Machines feels very different from what has gone before. For the first time since Planet of the Giants, we have a story entirely set on contemporary Earth. We have some elements that would become a standard feature, Dr. Who working with an establishment figure, a military presence and a renegade computer seeking to control people. The War Machines is a template for much that would come later. Personally, this is not the kind of Doctor Who I like. I very much prefer the more fantastical Hartnell material, as well as the historical serials, but I do enjoy the freshness of this story and the sense of departure in it. Added to this, The War Machines gives us to new companions who are very different to previous companions, being trendy twenty-something adults (Barbara and Ian are probably in their twenties, but they don't feel trendy in any sense). The stories that follow show them taking to TARDIS travel with an enthusiasm that contrasts very strongly with Ian and Barbara. In this, they are a also templates for the later direction of the show.


I don't care much for stories with computers as villains. Part of this is down to the fact that they make boring bad guys, but also it seems inconceivable. Computers do not have a will or a consciousness. They are not persons. A computer simply processes the information it is given. A computer is no more likely to try to take over the world than your kettle. This makes me inclined to favour the fan theory that WOTAN is in fact a Dalek plot. Is it only a coincidence that the Daleks are active on Earth at this time? The whole WOTAN business does have a very Dalek feel to it. 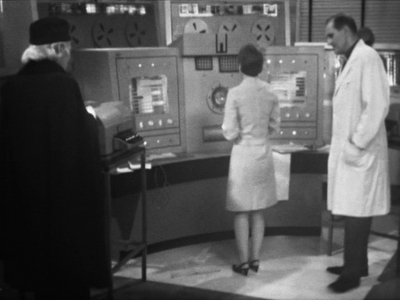 The War Machines themselves are a little awkward, but they are visually interesting. The real problem with them lies in the fact that we only ever see one at a time, thus reducing their impact.

William Hartnell gives an energetic and engaging performance. His illness is not at all apparent here. He has perhaps lost something of the edge that characterised his earlier performances and has settled into being a kindly grandfather figure. Yet he is still delightful to watch.

Dodo's supporters are thin on the ground, but I still love her. Her characterization is paper thin, but she is so cheerful and pleasant. The sincerity in Jackie Lane's performance contrasts very strongly with the very knowing approach taken by Maureen O'Brien. Sadly, Dodo is not the last companion to be given a clumsy departure.

Ben and Polly are an instant hit. They are both well characterized and distinct. Ben quickly develops a great rapport with Dr. Who. Polly is also a strong personality. It is perhaps a little disappointing that she seems so meek and timid when a nightclub patron approaches her with immoral intentions. This highlights the way her character would frequently be inconsistently portrayed, with her being sassy, confident and sarcastic one minute and then whimpering with terror a few minutes later. Tragically, this is the only completely surviving story to feature this pair.

The War Machines is a light and enjoyable story at the tail end of the Hartnell era. While it is far from perfect, it deserves to be appreciated.

Posted by Matthew Celestine at 04:45