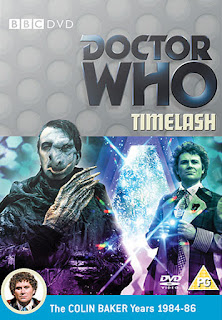 There are fans who defend Timelash. I wish I could do that, but I just don't enjoy Timelash enough to defend it. It's fun in places and has a cheerful pantomime feel that part of me wants to admire. It's also interesting that in some ways it functions as a sort of parody of bad Doctor Who, sharing many of its faults with countless other Doctor Who stories, for instance a planent with about six inhabitants. I don't think that redeems it though.

The plot is just bonkers. How did the Borad ever take over Karfel? Why does he chuck people down a time tunnel instead of just shooting them or even feeding them to the Morlocks? How are people actually able to climb into the time vortex? The Borad is visually interesting and everybody agrees this is a redeeming feature, but he feels like an awful lot of other Doctor Who villains.

The presence of HG Wells feels like an embarrassment, primarily because the writer don't seem to have done any research into what kind of person HG Wells actually was. There seems little resemblance between our Herbert and the historical figure.

Posted by Matthew Celestine at 03:02