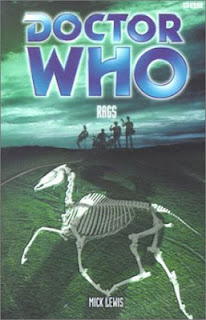 Rags appears to aspire to be the most violent Doctor Who novel ever. It certainly succeeds. We are treated to chapter after chapter of savage and graphically described violence. People are butchered, sometimes by people they know. Every character is affected by the primal urge to fight and kill, except the Doctor, of course. Generally, I dislike strong violence in Doctor Who, however, I accept that Rags is a book that could never have been written without the shocking graphic brutality it is given. I doubt that it had many young readers, fandom at this period in Doctor Who having become a more mature company.

This novel is about punk rock. That in itself is an interesting topic because until the McCoy era, there are no visual references to punk in Doctor Who. The show and its writers appear to have largely ignored the punk movement when it was at its most prominent. While the New Adventure novel No Future dealt with the DIY performance side of punk, this novel deals with the nastier, more disturbing side of the movement and how the music was associated with a savage urge to deal out physical violence.

The real pleasure of this story is seeing the world of the Third Doctor era turned upside down. The kind of realistic violence we see here just didn't happen in Third Doctor stories. Best of all is what the author does with Jo Grant. We see Jo get into punk rock, smoke a joint and share a lesbian kiss. This is Jo Grant as you have never seen her! Mike Yates is as daft as ever and wears an appalling disguise as an hippy. Yet strangely, he is show to be rather useful in hand-to-hand combat.

While I certainly enjoyed reading Rags, I was very conscious of its flaws. It feels very much like it is a little too derivative of other novels, particularly in the New Adventures range. It almost feels like an ironic tribute to the Virgin New Adventures. It's plot is also a little too stodgy and slow paced. I also felt that the incident with Princess Mary was oddly handled. This was a massively significant event and its implications were barely touched on this novel.

On the whole I was disappointed with the way the Doctor was handled. He is described accurately, but he lacks the colour he might have been given. I would have liked to have seen him vent some snooty disgust at punk rock music. Unfortunately, he is written out of a good deal of the action and spends time in a kind of dreamscape (New Adventure cliche!). The way he stays out of the action and he keeps his plans to himself actually adds to the Virgin New Adventure feel of the story, but unfortunately fails to make it engage as a Third Doctor story.

The subplot with Kane and his family secrets felt somewhat out of place; this was very much supernatural horror territory. While this subplot was written well, it very much felt like a distraction from the much more interesting socio-political exploration of the punk theme.

Rags is an interesting installment in the BBC Past Doctors range and does something quite different, but perhaps fails to be a great Doctor Who novel.
Posted by Matthew Celestine at 04:30