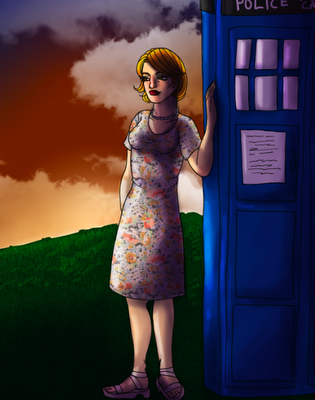 I asked Jokerxsiren to draw a picture of Elizabeth Klein from the Big Finish audios. Klein (voiced by Tracey Childs) is a Nazi scientist from an alternate timeline in which the Nazis won the war. She temporarily travels with the Doctor as his companion, a strained relationship if ever there was one! I have written a lot of fan fiction about her.

Drawing Klein was a challenge for Jokerxsiren as we have only ever seen the face and shoulders of the character. I like the figure that she has given her- a mature woman who has aged very well, but is not skinny. One of the things I love about Klein is that she is a mature woman who is elegant and sexy. Too many Doctor Who characters are 20-something girls in short skirts.

I asked the artist to draw Klein in a floral dress. In my fan fiction I have always described Klein as wearing feminine clothes and avoided putting her in uniforms or boots. This creates a contrast with her cold personality.
Posted by Matthew Celestine at 11:32