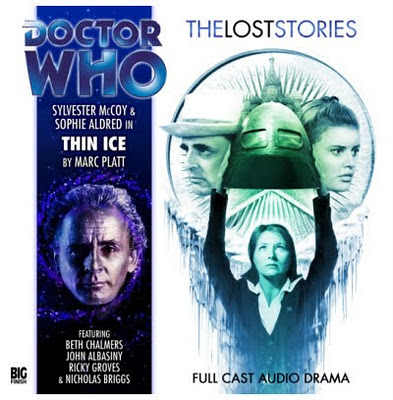 It's a real tragedy that Season 27 was prevented by the show's cancellation in 1989. Script editor Andrew Cartmel had a clear idea where he wanted to go and Doctor Who had a strong set of leads in Sylvester McCoy and Sophie Aldred. Given the presence of a clear design for Season 27, it makes a lot of sense for Big Finish to create this lost era on audio. The big problem with this project is that we already have a Season 27 in the Virgin New Adventures. Those books carried on where the show left us in 1989 and to some extent continued the vision that Andrew Cartmel had set for the show. Cartmel himself contributed to these novels, most importantly with Cat's Cradle: Warhead. Not only do we have a Season 27 in the Virgin novels, but we also have a Season 26B in the Big Finish audios set in between Survival and Timewyrm: Genesys.
This story was intended to see the departure of Ace to train to become a Time Lord, an idea which has a lot of merit and which makes sense of the way the Doctor was continually manipulating her. Big Finish opted not to abandon the continuity of the New Adventures and altered the premise of the story so that Ace is rejected by the Prydonian Academy. Thus, Ace remains through 'Season 27' and an even bigger gap between Survival and Timewyrm: Genesys is created. I am going to speak as somebody who loves the Virgin New Adventures from the bottom of my heart. I have a real problem with Big Finish when it comes to Ace. For me the New Adventures defined how Ace would develop after Survival. We see a progress in them from Ace as an immature teenager to Ace as a hardened, brutalised war veteran (the Ace that everybody hates except me). I refuse to accept that the gap between Survival and Timewyrm: Genesys lasts longer than a couple of weeks. I see the New Adventures as following on directly from Season 26 and being the real Season 27. Big Finish have almost killed this notion by filling up a non-existent gap with audios featuring a pre-NA Ace. We are now saddled with a pointless set of continuity where Ace starts calling herself 'Dorothy McShane' and is then joined by a bloke called Hex. I like Colditz just because it introduced the delightful Elizabeth Klein, who is the most wonderful companion ever, but otherwise I hate it because it detracts from the NA story. The Ace in the early New Adventures is not a young woman who has had a tonne of different adventures and more mature than the t.v. version. The Ace in the early NAs is the same immature teenage Ace at the end of Survival. I refuse to believe otherwise.
Given that Ace does not end up departing the Doctor to go to Gallifrey, one has to ask what the point was in including the subplot about her being tested by the Time Lords. It all feels rather pointless and it just ends up being another example of Ace getting mad at the Doctor for manipulating her and the Doctor promising to be nicer next time (yeah, right..).
Re-locating the original story to Soviet Russia in the Sixties was a nice idea that could have worked well, but somehow the audio does not use this setting to any great effect. The claustrophobic cold war atmosphere fails to register with the listener and it just sounds like any old place with a lot of people speaking in foreign accents. One odd feature of this audio, as pointed out by another reviewer is just how quiet the audio is. There is a real lack of any significant background noise. There are parades going on commemorating the October Revolution, yet we don't hear any military music whatsoever. They should have thrown in the Russian anthem and at least one Red Army marching tune. John Nathan-Turner would have killed for the budget to re-create a Red Army parade as television spectacle. We could at least hear what it sounds like. That said, I do like the musical score with its strong percussion.
The plot is not that unlike Silver Nemesis or Remembrance of the Daleks, with factions competing over alien technology. This time the main aliens are the Ice Warriors. Nicholas Briggs does a great job with the Ice Warrior voices, but many fans have had problems with the way they are portrayed. These are revisionist Ice Warriors who have been living peacefully on Earth and who eat fish fingers. Yes, fish fingers. This could be a reference to The Eleventh Hour. I quite liked these Ice Warriors, but I understand why they will bother some listeners.
This was an interesting audio, but came across as rather dull for the most part and just a little bit pointless. Quite a disappointment on the whole.
Posted by Matthew Celestine at 05:26