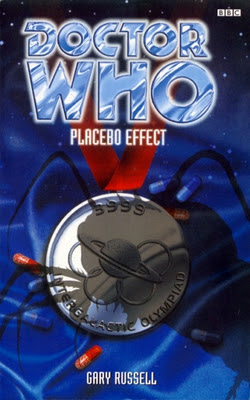 Placebo Effect has Kleptons in it. Those aliens from the first ever Doctor Who comic strip; the ones that look like Greedo the Rodian. You know what that means? If Placebo Effect is canon, then so are the TV Comic strips. The Doctor really did have two grandchildren called John and Gillian, really did meet Santa Claus and really did call himself Dr. Who. That Gary Russell references the TV Comic without trying to exclude it from the canon (as Steve Lyons did in Conundrum and Head Games) makes me quite favourably disposed towards this novel.
Although this novel is not highly regarded among fans, I mostly enjoyed it. It's very light-hearted and packed with continuity references. Russell brings back Stacy and Ssard, who appeared in an 8th Doctor comic strip in the Radio Times not that long after the TV Movie. This novel offers some explanation as to how that strip fits into continuity.
Russell claims he originally proposed to write a novel about Nimons vs Macra, but what he gives us here is a novel about Foamasi and Wirrn. Russell does rather a better job with the Foamasi than he does with the Wirrn. His Wirrn lack sufficient body horror to be really disturbing. He does make his Fomasi quite interesting, however. He gives them plenty of character and explains how their disguises work. In a quite disturbing moment, a human realises that the woman he has been sleeping with was really a Foamasi in disguise.
The Doctor is very well characterised. He is dreadfully nice; always remembering the needs of his companions and doing his utmost to look after them. This is perhaps a little strange given that this is the same person who never went back for Sarah and seemed to forget about his own granddaughter. I suppose he has matured, but it makes it even stranger that he has still refrained from paying Sarah a visit. Russell is perhaps a little less successful with Sam, but then it is difficult to avoid having a teenage character coming off as anything other than mouthy and irritating.
Sam gets involved in an interesting debate between creation and evolution. This is not resolved, which makes a nice contrast with the materialistic tendency of the show. I am no longer a Six-Day Creationist, but I am not completely convinced by the theory of evolution. The actual arguments used against evolution are not all that impressive, but at least there is some acknowledgment that the not everybody is convinced by Darwin.
I really liked the Duchess of Auckland. She was a really fun character, even if a parody of the royal family. I thought it was a bit of a shame that Russell killed her off. Why do writers have to kill characters so easily?
Despite its reputation, Placebo Effect is a reasonably decent novel. The cover is good too; especially with its subtle reference to the V series.
Posted by Matthew Celestine at 04:39