Eye of the Scorpion, by Ian McLaughlin (Big Finish Audio) 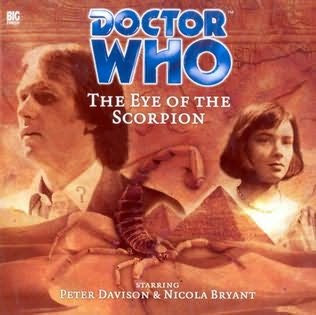 Ancient Egypt is an historical setting that has not been used terribly often in Doctor Who, so it is rather nice to have the place in this audio. Ian McLaughlin has given us a pretty interesting plot regarding the historically unrecorded Pharaoh Erimem, so it would have been nice for this to have been done as a pure historical. Unfortunately, he took the easy way out and gave us an additional plot about alien parasites that does not feel terribly original.

The Egyptian setting genuinely feels like a real place. One small detail did really irritate me and I felt it compromised the authenticity of the drama. That was the clacking sound of the footsteps. I know loud footsteps work best on audio, but it does not fit the historical background. For the most part Egyptians went barefoot, even Pharaohs and noblemen. When Egyptians did wear shoes, they wore reed sandals, a bit like flip flops. These would not have made the loud clacking noises in the sound effects. In an historical, details like this matter.

I'm a big fan of the Fifth Doctor/ Peri line-up. They work wonderfully well together. In this audio, Big Finish introduce a new regular character to interact with this team. This is the female Egyptian Pharaoh, Erimem, played by Caroline Morris. Erimem is an extremely interesting character and very well conceived, even if she does use anachronistic words like 'parasite' and hold sceptical beliefs that are not altogether convincing. Erimem quickly develops a wonderful relationship with Peri that continues to flourish in the following audios. Peri and Erimem seem to be a godsend for femslash writers who have offered some speculation about their relationship. After having to put up with the rather unsexy Evelyn Smythe, listeners may be glad to have two cute girls in the TARDIS.

Peter Davison gives the best audio performance that I have heard from him so far. Rather disappointingly, he is largely written out of one episode. Perhaps Ian McLaughlin was trying to capture the feel of an Hartnell historical. Nicola Bryant is also on top form and sounds rather like she is enjoying every minute of it.

Despite the irritation of the inauthentic footsteps and the deja vu of the sci-fi component, I found this audio massively enjoyable.
Posted by Matthew Celestine at 09:32