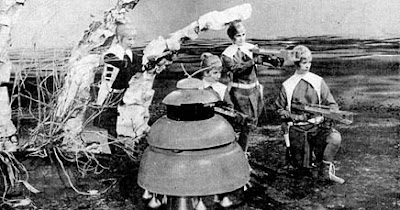 The First Doctor and the TARDIS crew meet the amazonian Drahvins, but what of their enemies, the Rills?

You know I really like stories like The Sensorites and The Web Planet. Give me them any day over those horrific Hinchcliffe stories. There is something dreamy about the pace of these stories.

Sadly this is a lost story and even the available photography on the reconstruction is very minimal.

Like most of the stories of its era, Galaxy 4 suffers from being far too long. Still if you have patience, the reconstruction is worth taking a look.

The title of the story is a bit misleading. The story is not set in Galaxy Four, but rather that is where the Drahvins have come from.

The desert setting is not unusual, but the weird rock formations are effective in making it look alien.

The Drahvins are cool. Female villains are a rare treat in Doctor Who. Their leader is chilling, and their rather brutal and spartan society is well portrayed. The stupidity of the lower rank Dravhins is funny. The Rills are also well designed. Having them amonia breathing was imaginative and sets them apart from other Doctor Who aliens.

The moral message is rather simple; don't judge by appearances. This is not laboured on, however. The Doctor shows immediate suspicion towards the Drahvins and their maleovolence is quickly revealed. Perhaps it might have been more interesting had the writers kept us in the dark a bit longer about the evil of the Drahvins. The simple morality of the story has a nice old-fashioned quality.

The 'chumbly' robots are not very menacing, but serve the purpose of keeping the Rills unseen.

The regular cast put in a solid performance in this story. The Doctor is nicely cantankerous. The other two characters, Steve and Vicki are used effectively.

I rather imagine that some of the later Doctors might have been more concerned about the fate of the Dravhins at the end.

If you like Hartnell stories, the reconstruction of this story is definitely worth watching.
Posted by Matthew Celestine at 10:48