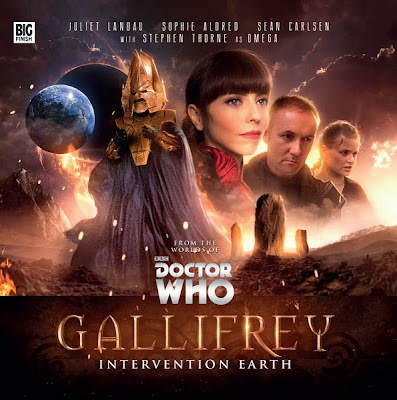 I listened to the first series of Big Finish's Gallifrey spin-off, but after that I had not followed this range. However, when I saw the incredible cover of this audio, with the new Romana, Ace and Omega in his original costume, I had to buy it. As it turned out, I had no problem enjoying it having heard only one Gallifrey season. I'm sure Doctor Who fans could have enjoyed it without having heard any previous releases.

In this story, we see Ace with her own TARDIS, working for the Celestial Intervention Agency. I have always like the idea of Ace becoming a Time Lord; it made sense of the way the Seventh Doctor seemed to be testing and preparing Ace for some unknown task. Ace is not a Time Lord here, but she is obviously moving in that direction. I'm not sure Sophie Aldred pulls of this massive character development, but I'm glad she's here.

The big treat here is the return of Stephen Thorne as Omega. I simply adore his bombastic vocal performance as Omega in The Three Doctors. Sadly, we don't get to here him as much as we might have hoped and he does not get quite as angry as he did the first time around (You have angered me!)

The story follows The Three Doctors quite closely in plot. This actually makes it the second attempt to re-write the Three Doctors after The Infinity Doctors. One problem is that though we go into the anti-matter universe, the sound effects do not really convey any sense of what this place is like. They could at least have given us Omega's wibbly-wobbly Gell Guards!

I really do like the new incarnation of Romana. Juliet Landau really does bring something new to the character with a much more seductive and understated performance than we got under Lalla Ward. I'm very much forward to hearing more of her. There seems to be quite a bit of debate among fans as to whether the Juliet Landau Romana, known as 'Trey' is the same as the Romana III in the BBC books. Her creator seemed to suggest she was not, despite other voices in Big Finish to the contrary. I am very much of the opinion that she is the same Romana III who becomes War Queen of Gallifrey. Her appearance clearly resembles descriptions of the character, even down to the outfit she wears on the cover. Furthermore, she has the ruthlessness and seductiveness of the novels' Romana III. Her interest in the future of Gallifrey reflects the interest of Romana III in the coming War of Heaven, though I doubt Big Finish will be exploring that continuity minefield, even if Lawrence Miles did give them permission.

I don't think this audio quite lives up to the explosive cinematic looking cover, but it is enjoyable and promises exciting things ahead. The upbeat musical score, included as a separate track, as usual, is impressive too.

Posted by Matthew Celestine at 06:51