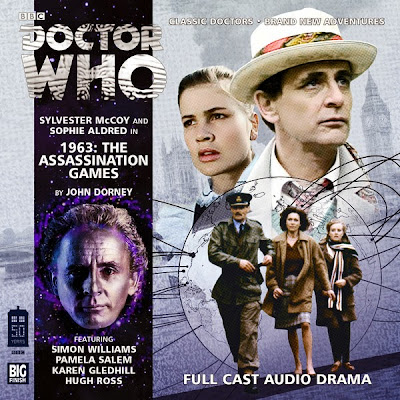 Assassination Games evokes the early Sixties Counter-Measures era, with all the Cold War paranoia, the nuclear scares, the allusion to the Profumo affair and the upper class domination of public life (I suppose that's true of today!). In the first half of the audio, the Counter-Measures team get to play their various parts in the story. On the whole, however, it does not quite feel like a Counter-Measures story. For one thing, being a prequel to the series, the team don't quite feel like the characters those of us who followed the spin-off have come to know. Furthermore, the threat turns out to be on a more cosmic scale than Counter-Measures is used to dealing with and so the focus rather shifts onto Ace and the Doctor in the second half.

I was convinced until the climax that the bad guys in this would turn out to be the War Lords from The War Games. The title of the story hinted at that, as did the delight in which the villains seemed to play their aristocratic role. I do think it would have made for quite an effective re-vamping of this old foe. I was very disappointed when it turned out they were some faction we had never heard of, one that was immersed in the cliched trappings of conspiratorial thinking. It also seemed that there was something of a tension between how the Light were written and how they came across. The writer seemed to conceive them as selfless fanatics, yet they seemed to come across more as self-serving public school bullies.

It must have been lovely for the cast of Remembrance of the Daleks to re-unite and it was nice to have a taste of Counter-Measures prior to Season 3, but on the whole this was a little disappointing.

Posted by Matthew Celestine at 04:26