The Day of the Doctor 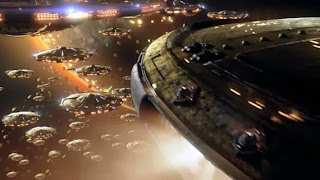 Strong coherent plotting is what The Day of the Doctor badly needed. It rambled from one mismatched sequence to another with no real sense of where the story was going. It was made up from a number of story strands, the UNIT stuff with the Zygons, the daft bits with Queen Elizabeth I and of course the stuff about the War Doctor and the destruction of Gallifrey. These all felt like they belonged in different stories and they seemed rather poorly held together in this. As is so often the case, two much comedy is allowed to weaken a serious storyline. The New Series has consistently, and particularly under Moffat, failed to understand that to tell a serious story, some of the laughs have to be trimmed. What made Season 18 so great was that the comic excesses of Tom Baker had been curbed and prevented from intruding on proper storytelling. The New Series has never really achieved that consistency of tone. It presumes that viewers can't cope for two minutes without a comic line being thrown in.

Pacing was also a problem. The New Series format of short forty-five minutes episodes has big limitations, but Moffat seems to struggle with stories with a fuller length. The Day of the Doctor rambled on for quite a while before any kind of story felt like it was in motion. As with much that Moffat has written, I found myself feeling bored. Doctor Who is always at its worse when it starts to feel boring. Nothing felt particularly original; shape-changing aliens, weapons of mass destruction, historical romps, these are all things that Doctor Who has done in different ways before. I know this is supposed to celebrate the series' past, but simply regurgitating old themes makes for a uninteresting story.

As a multi-Doctor story, I don't think it was a great success. There was hardly any real chemistry between the Doctors. They argue a bit, but there is no sense of a conflict between contrasting personalities who are actually the same person. Part of the problem is that David Tennant is such a leading man actor. He seems to struggle to know how to play his role in tandem with Smith. Not having seen Hurt as the Doctor before this, it was also difficult to really regard him as a Doctor alongside the other two.

There was some nice dramatic tension toward the end with the question of whether the Doctors would press the button, and thankfully this got resolved almost satisfactorily, provided one completely forgets about The End of Time. We had better hope that the Doctor finds Gallifrey soon, otherwise freezing children in time seems no better than killing them.

I'm surprised this story has gone down so well with viewers and fans. I'm sure nobody who follows this blog expected me to like this, but I had expected a bit more of a critical reaction from some writers. For all its faults, I think An Adventure in Space and Time is the real 50th anniversary special, not The Day of the Doctor.
Posted by Matthew Celestine at 08:43